THE BOOK OF THE GOETIA OF SOLOMON THE KING: TRANSLATED INTO THE ENGLISH TONGUE BY A DEAD HAND AND ADORNED WITH DIVERS OTHER MATTERS GERMANE DELIGHTFUL TO THE WISE

The Equinox Booksellers and Publishers, Kensington, London, February 1976. Hardcover without dust-jacket. 76 pages. Facsimile of the 1904 first edition published by The Society for the Propagation of Religious Truth. Includes the names, offices and orders of the ‘evil’ spirits, rituals in Enochian and English and illustrations of seals/sigils on several plates. This scarce and much sought after facsimile edition was put out by Jimmy Page via his occult bookstore and publishing house (see photos). Moderate shelf-wear/soiling, some rubbing to extremities, Very Good. A beautiful, scarce and highly desirable edition.

In 1904, Aleister Crowley commissioned, edited, and introduced an English translation of The Book of the Goetia of Solomon the King, the first of five magical texts known as the Lemegeton. Yet few have actually worked the system, believing one must conform blindly to the archaic procedures and long-winded conjurations of the original text. But Crowleys attitude toward the Goetia appears to have been different. His masterful expansion and perfection of the Preliminary Invocation of the Goetia is a prime example.

The Led Zeppelin guitarist, Jimmy Page, opened an occult bookshop and publishing house called The Equinox at 4 Holland Street, Kensington, London. The Equinox Booksellers and Publishers to give it it’s full name although a shop, was never designed to make money but to enable him to acquire and publish books. In an autobiography Jimmy Page wrote “There was not one bookshop in London with a good collection of occult books and I was so pissed off not being able to get the books I wanted”.

The first two books published were The Book of Goetia translated by Aleister Crowley and Astrology, A Cosmic Science by Isabel Hickey. By 1979 the shop lease expired and Jimmy admitted, “It’s obviously wasn’t going to run the way it should without some drastic business changes and I didn’t really want to agree to all of that. I basically wanted the shop to be a nucleus, that’s all”. 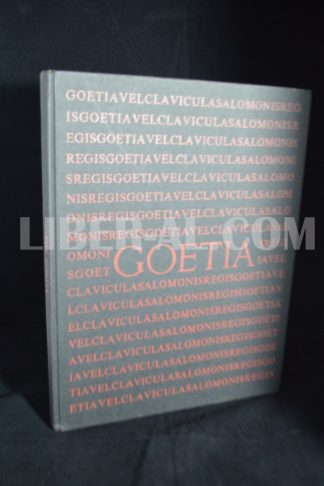 You're viewing:  THE BOOK OF THE GOETIA OF SOLOMON THE KING (1976 JIMMY PAGE EQUINOX EDITION) $317.06
Add to cart
We use cookies to ensure that we give you the best experience on our website. If you continue to use this site we will assume that you are happy with it.Ok