Tarot of the Magical Forest

Throughout human history and across every culture, there have been legends, myths, and tales of talking animals. This delightful Tarot takes advantage of this by using animals on all of the cards, adding to the Rider-Waite-Smith symbolism that was already there.

The Major Arcana cleverly features sheep, lions, bears, pigs, hedgehogs, and kangaroos, adding a wonderful feel to the cards that is happy and basic. The Strength card, which shows a lamb and a lion nuzzling each other, has to be the sweetest version of this card ever. The Sun card shows a baby kangaroo in his mother’s pouch in a field of sunflowers under a huge sun happily waving a little red flag with innocent, blissful joy.

The Minor Arcana suits, while traditionally named, each feature a specific animal: Cups have bunnies, Pentacles have foxes, Wands have frogs, and Swords have cats. These choices brilliantly represent the suit qualities. Bunnies bring forth feelings of warmth and sweetness. Foxes are thought to be clever. Cats can be seen as intelligent and emotionally distant. Frogs, well, they like games (leap frog, anyone?).

So the Four of Cups shows a bunny under a tree with three cups in the foreground and one being offered by a hand emerging from a cloud (like the RWS). This bunny has her eyes closed and is very much at peace, using creative visualization to manifest what she wants.

This refreshing, whimsical, and wonderful deck will surprise you every time you use its immediately evocative images.

Summary: The Tarot of the Magical Forest is a quirky and slightly bizarre version of a Rider-Waite-Smith deck. As such, it can be used easily by anyone familiar with that tradition. For beginners who learned on a more traditional RWS deck and are seeking a new deck, this would certainly be a choice, if the art resonates.

“Once upon a time there was an enchanted forest…” begins the LWB [“Little White Booklet] for this deck. The text goes on to remind us of the literary tradition of tales with talking animals (or is it talking animals with tails?): Aesop, Carroll, Andersen, the brothers Grimm, for example. Anthropomorphizing animals has been done for centuries and continues to be used today as a device in books, movies, television shows, etc. Why? Probably because it works. Using animals with whom we associate certain traits is a shortcut, a use of symbolism, as almost all Tarot is. So while we may be tempted to relegate this deck to the “charming Rider-Waite-Smith clone” pile, we should take a little closer look before doing so.

The Minor Arcana suits, while traditionally named, each feature one specific animal: Cups have bunnies, Pentacles have foxes, Wands have frogs, and Swords have cats. These choices really represent the suit qualities very well. Bunnies do bring forth feelings of warmth and sweetness. Foxes are thought to be clever, using their smarts to achieve what they want. It’s easy to see cats as intelligent and emotionally distant. Frogs, well, they like games (leap frog, anyone?) and “they particularly enjoy the joys of sex.”

The Majors have a variety of animals, such as sheep, lions, bears, pigs, hedgehogs, and kangaroos. These images aren’t as layered and complex as in some decks. However, they do evoke an immediate response that has strength in its simplicity. This is great for many reasons, one being that not everyone wants to learn a new language (such as that of Kaballah or astrology) in order to read Tarot.

These cards do have an air of simplicity to them. Perhaps it is the sign of a very good artist that s/he can evoke emotional, intellectual, and spiritual responses in a simple image. For example, in the 7 of Pentacles, although we cannot see the fox’s mouth, there is this feeling that he is looking at his pentacles and smiling-he seems very pleased with his work. In the 3 of Wands, we just see the frog from the back, but the aura about the card is one of patient yet confident waiting. The 7 of Wands shows the frog holding a wand and facing six others coming at him. His expression is one you’ll recognize: “oh *&%#!” The Strength card, which shows a lamb and a lion nuzzling each other, has to be one of the sweetest versions of this card ever. The gentleness is so powerful…and that is the point here.

Most of the cards are very faithful to the Rider-Waite-Smith tradition, including the composition. The 4 of Cups, for example, shows a bunny under a tree with three cups in the foreground and one being offered by a cloud with a hand (like in the RWS version). But because of the expression on the bunny, this card has an entirely different meaning. It is not one of obstinate apathy or ennui. This bunny has her eyes closed and she seems very much at peace, perhaps using creative visualization to manifest what she wants-maybe more cups to add to her collection or maybe one that is slightly different than the ones already existing.

All in all, this quirky, whimsical, odd little deck will surprise you every time you use it. It is refreshing to look at images that are so immediately evocative after working with some more complex, heavily layered decks. It will find a place in your “often used decks” pile.

Name of deck: Tarot of the Magical Forest

ISBN: 0738714127
Creator’s name: Hsu Chi Chun
Artist’s name: Leo Tang
Name of accompanying booklet: Tarot of the Magical Forest
Number of pages of book/booklet: 63 (14 in English, the rest in Italian, Spanish, French, and German)
Author of booklet: Giovanni Pelosini
Brief biography of author: Giovanni Pelosini is a Tarot artist and author.
Reading Uses: General
Artistic Style: Whimsical/Fantasy
Theme: Animals/Nature
Does it follow Rider-Waite-Smith Standard?: yes
Does it have extra cards?: no
Does it have alternate names for Major Arcana cards?: no
Does it have alternate names for Minor Arcana suits?: no
The minor arcana are traditionally named, but they also have an additional association:
Chalices feature bunnies.
Pentacles feature foxes.
Wands feature frogs.
Swords feature cats. – From the Publisher 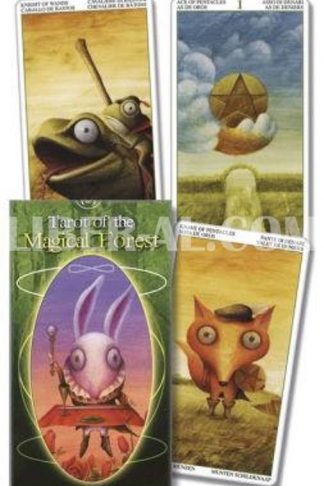 You're viewing: Tarot of the Magical Forest $17.52
Add to cart