Journey with the enlightened feline and welcome their unique secrets. Cats-cute, mysterious, mischievous, or aloof-seem to live in a world between worlds, a realm of magic and power. Access their unique wisdom with this beautifully illustrated deck, featuring traditional Rider-Waite imagery and Pagan symbols.

The companion booklets for most Lo Scarabeo decks are in five languages: English, Spanish, French, Italian, and German.

TheTarot of the Pagan Cats is a true RWS-style that cleverly interweaves magick and Tarot as experienced through the eyes of cats. Natural and easy to read, this deck will delight the beginner as well as the more experienced reader.

TheTarot ofPagan Cats was created with three goals in mind:

To be a RWS-style deck

To explore the Tarot via realistic cats, and

To weave the elements and magick into the images

The deck does all of these quite nicely.

The cats adorning these cards are drawn to look natural. And except for the odd crown, garland, or charm hanging from a collar, these cats do look much as they would in real life. Lola Airaghi did an excellent job of capturing subtle expressions on these fascinating felines. The knights, however, are an exception. Each knight is riding (as is the habit of knights) another creature. The Knight of Wands rides a fox; the Knight of Cups, a turtle; the Knight of Swords, an owl; and the Knight of Pentacles, a goat.

The deck does intend to be more than just cats playing at Tarot. These are, after all, supposed to be Pagan cats. The Paganism shows up mostly in terms of the cats’ relationship to and use of the elements, which, although very magickal, is also quite familiar and comfortable for most Tarot readers whether pagan or not.

Magick does inform the deck images. It begins with the Fool dreaming of or imagining an intent. Magical practitioners know that intent is vital to any sort of magical activity. The Major Arcana sequence ends with the World, showing that the dream of the Fool has been manifested.

Another interesting pair is the 4 and 10 of Swords. In the 4 a spell is being worked. The altar is attended to, the cat is peaceful in the knowledge that what can be done has beeen done. In the 10 (the only card without a cat in the image), there are ten swords in place of the cat. Cobwebs cover the altar. The magick is gone, only a trace is in the air flowing out the window. Has the magick been completed or has it been abandoned?

The court cards are particularly well designed. The Pages relate to the Aces. In the Pages, the cat is the focus, while in the Aces, the suit designator is the focus, clearly illustrating the subtle difference and important similarity between these two sets of cards. The Queens relate to the Empress, showing the cats sitting on pillows, symbolizing a nurturing, comforting power. The Kings relate to the Emperor. The Emperor is shown on a pedestal made of four steps. Each step is engraved with the symbols of one of the suits. The Kings are shown on a cube engraved with an animal representing their suit. The Knights relate to the Chariot.

There are plenty of interesting, interwoven delights to discover in this deck. It is one of those rare decks that are as easy to read with as they are fascinating to study.

Name of deck:Tarot of Pagan Cats

Brief biography of artist:Lola Airaghi studied at the Scuola del Fumetto di Milano. She drew her first comics for Il Corrierino and Blue. She then became an artist for Bonelli, where she worked on series like “Brendan” and “Legs Weaver.”

Available in a boxed kit?: No

Does it have extra cards?: No

Does it have alternate names for Major Arcana cards?: No

Does it have alternate names for Minor Arcana suits?: No

Does it have alternate names for the Court Cards?: No

Why was deck created?: to explore the archetypes of the tarot through the eyes and experiences of cats and to include touches of magick.

Book suggestions for experienced Tarot users and this deck:Any basic beginner book, such asTarot for Beginners . – From the Publisher 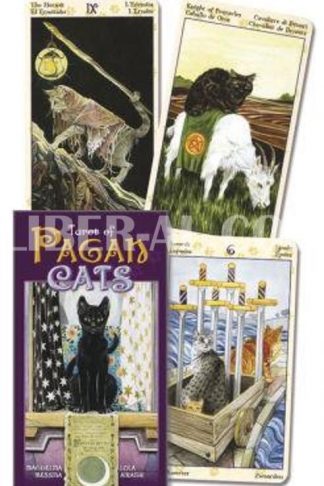