The Book of Shadows by Lady Sheba

Llewellyn is pleased to bring back into print the book many consider to be the authentic holy book of Wicca, thefirst Book of Shadows ever published in the United States-Lady Sheba’sBook of Shadows.

For generations, secret Craft teachings had been handed down by word of mouth to new initiates. When Lady Sheba was initiated into her first coven, she hand copied The Book of Shadows . It was her wish that publication would bring to light the authentic beliefs of Witchcraft and reestablish the respectability of this ancient art.

The Book of Shadows includes:
– Secret initiation rites
– Laws of the Craft (162 total)
– Eight ceremonies for the Sabbats
– Consecration rituals
– Invocations
– Actual chants and dances for calling on the gods

Lady Sheba was one of the first people in the United States to officially establish the Craft as a legally recognized religion. She registered “The American Order of the Brotherhood of Wicca” as an religious organization in Michigan on August 13, 1971. She stated that she was a witch “by traditional heritage” and a “Gardnerian Witch by choice.”

Lady Sheba’s was the first published Book of Shadows in the United States. The author brought it to Llewellyn in 1970; it was released in 1971 and reprinted in 1973.

Lady Sheba was among the first (perhaps the very first) to register Wicca as a religion (in the State of Michigan) and inspired many others to do the same.

With publication of The Book of Shadows bringing Wicca “out of the closet,” Lady Sheba became the target of some animosity. She was accused of violating “oaths of secrecy” and of publishing material that wasn’t original with her. She answered that the time for secrecy was past, and that she never claimed to be the author, for this was the Book of Shadows as passed on to her.

In one instance, the Invocation of the Horned God, we want to acknowledge that much longer poetic version was earlier (1965) published and copyrighted by Doreen Valiente in Pentagram.
Following publication of The Grimoire of Lady Sheba (1972), she withdrew from public life and we lost contact with her. With rumors of her death, and with no contact with the family, we were reluctant to reprint the books. However, this year, following her eightieth birthday, we are again in contact with Lady Sheba and her family, and are re-issuing her works. 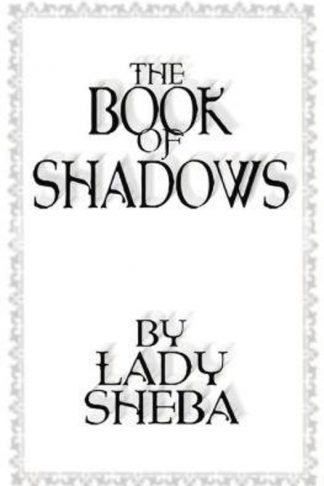 You're viewing: The Book of Shadows by Lady Sheba $11.03
Add to cart
We use cookies to ensure that we give you the best experience on our website. If you continue to use this site we will assume that you are happy with it.Ok