Elves and dwarves, gnomes and frost giants…Norse mythology is filled with tales of such supernatural beings, nature spirits, and powerful deities. Many people know that the Norse people were fierce warriors, but did you know that they were powerful magicians as well?

Norse Magic has everything you need to learn in order to begin practicing Norse spirituality. Discover the history and religion of the Vikings, including Norse mythology, seasonal festivals, and magical techniques.

If you are interested in practicing Norse Wicca, you’ll learn about the three-fold goddess and the god, as well as how to celebrate the holidays, all from the perspective of Norse Paganism. Discover the secrets of herb magic, cauldron magic, cord magic, elf magic, dwarf magic, and more. These magical techniques are presented in a clear, step-by-step format.

The practice of Norse magic enlists the help of the Asa-Gods, Light Elves and good Dwarves. It elicits aid from dead ancestors and the rulers of the Elements. It is an active magic, reserved for participants, not bystanders. In order to work the magic of this system you must attune yourself to the powers of the Elements, calling upon the Asa-Gods and other supernatural beings. Norse Magic includes complete instructions, exercises, and rituals for this technique.

The Norse Pagans were one of the last European societies to convert to Christianity, but their Pagan mythology and magic survived and continues to thrive. Norse Magic is your key to the study and practice of this powerful and ancient spiritual system.

Many people are familiar with Greek and Roman mythology. But even though the Norse people remained pagans for centuries after most of Europe had converted to Christianity, very little is generally known of their mythology.

That is one of the reasons I’m glad Llewellyn has published D. J. Conway’s Norse Magic . Even if you’re not interested in following the path of Norse Paganism, this book helps to correct the lack of information that has been available. Here you will find page after page of the history, mythology, lore and rituals of the Norse. For example, you will find a comprehensive list of over 150 Norse gods, goddesses, supernatural beings, places and things, including a guide to the correct pronunciation of each term.

If you are interested in following the path of Norse Paganism, this book can become your most important resource. Included are rituals for each of the seasonal holidays, including Imbolc, Spring Equinox, Walpurgisnacht, Sonnenwende, Lunasa, Autumn Equinox, and the Feast of the Fallen Warriors. You will also learn about the gods and goddesses from the Norse point of view.

And then there’s the magic! You will learn how to cast the magic circle and what magical tools you need. You will learn a wide variety of magics, including herb magic, elf magic, cord magic, and cauldron magic. You’ll also discover the secrets of the Norse runes and how to use them for divination. 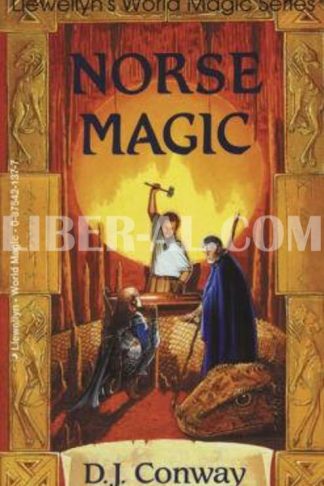