Open the door to the ancient Norse world of magic and spirituality with The Rites of Odin by Ed Fitch. The ancient religion of Northern Europe was one of remarkable strength and power, as well as magic and beauty. Its adherents were themselves a solid and adventurous lot: the Norse, Slavs, Germans, ancient Russians, and of course, the Vikings.

The Rites of Odin is a complete sourcebook that brings the ancient values back to these turbulent times. What you read here is poetic and powerful, perfect for groups who have chose to follow the Old Ways, for families who wish to be unified by warm and close ceremonies, and for the solitary seeker.

The Runes: their symbolism and use in divination

Brewing your own mead

The Rites of Odin puts forth the message, in rites, practice, and background lore, that you are uniquely important. You are in charge of your own destiny. The family and friends who constitute your “extended family” are also important: by working together and helping one another, all of you can prosper and be happy.

Ed Fitch, one of the founders and major scholars of modern Paganism wrote The Rites of Odin . Initiated into Gardnerian Wicca during the mid-1960s, he has continually added to the existing background lore on Wicca and mainstream Paganism, and is widely considered to be one of the best and most influential writers of rituals in the US today.

Come! Explore the ancient magical and spiritual practices of the Norse, Slavs, Russians, and Germans. When you practice the lyrical and elegant rituals and magical methods in The Rites of Odin by Ed Fitch, you’ll be able to take charge of your life, seize your destiny, and experience the remarkable strength of this compelling way of life.

The ancient Norse knew a rough magic drawn from the beautiful grandeur of vast mountains and deep forests, from the power of rolling oceans and thundering storms. Discover the religious and magical system of these explorers, farmers, warriors, and hunters with The Rites of Odin. Rituals, traditions, lore, and mythology all combine to demonstrate the simple yet profound truth that each of us is a valuable individual and responsible for our own destiny. You’ll discover how to live life with passion and honor, the way the ancient northern Europeans once did.

The Rites of Odin has been assembled from the best sources available in Scandinavia, Germany, and Eastern Europe. The background lore and rituals are fully integrated into a complete religious and magical system. Here are mystical teachings and magical rites for the solitary practitioner, groups of seekers, and even special materials for families who choose to explore this heritage together.

The archaic Way of Valhalla has a beauty and magic, a magnificence and power, that has not lessened over the past thousand years. Today, as well as in ages long past, it remains the way of the bold!
– From the Publisher 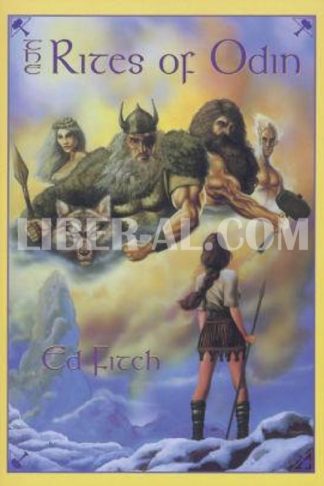