Now a classic in the field, used by students of the Golden Dawn as well as by those who want to understand Crowley’s tarot. This is the definitive study of the Egyptian tarot and is used as a key to all Western mystery disciplines. Color plates of eight cards.

“Aleister Crowley published his masterpiece on the Tarot, The Book of Thoth, in 1944. It was produced in an exquisitely printed, limited, numbered, and signed edition of 200 copies that has been a treasured collector’s edition since. Its eight color plates of several cards were hand-pasted in.

In 1969, Samuel Weiser, Inc. published a well-executed second edition reprint of the 1944 book. A quality hardcover with a lovely book jacket and full-color illustrations as per Crowley’s choices, it was reprinted several times until replaced by the ubiquitous trade paperback in the early 1970s, in print ever since.

This year, in celebration of the 60th Anniversary of Weiser Books has done it again. They have reissued a brand new high quality hardcover that is a true third edition. First, they worked with O.T.O. on replacing the original artwork (color and black-and-white) with color-corrected photos and scans of the original paintings in the Warburg Institute painted by Frieda Lady Harris. They also reproduced the beloved 1969 jacket, with more generous inside flaps and better paper. As a real treat, the book includes high quality color endpapers of the Egyptian design that was printed on the cover of Crowley’s 1944 edition. The text paper used in the book is a quality coated art paper which highlights the color plates as well as the halftones of the entire deck.

No words are needed to describe the importance of this book in Crowley’s literary corpus. Weiser Books has done it full justice. And for $60.00, you can’t go wrong.” –James Wasserman, author of the original Thoth Tarot pamphlet insert, “Instructions for Aleister Crowley’s Thoth Tarot Deck,” and Aleister Crowley and the Practice of the Magical Diary – Reviews 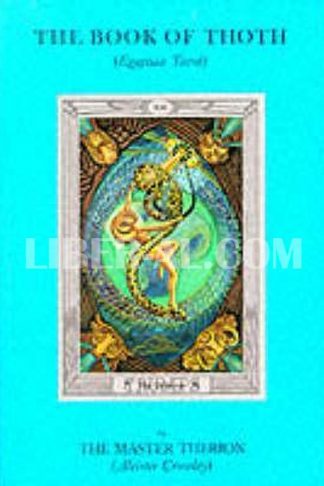