When Christopher Penczak was introduced to Witchcraft, he found a spiritual path that hononred and embraced his homosexuality. Now he has written a book of clearheaded theory and practice that is bound to become a classic. With Gay Witchcraft, Penczak joins the ranks of his forebearers in spirit, gay writers who have taken a tradition and made it home. This is a complete book of theory and spiritual practices of Witchcraft for the gay community. Penczak’s writing will make it much easier for gay, lesbian, bisexual, and transgender people interested in practicing any form of Witchcraft. Exploring the history of Paganism and offering a compendium of spells, meditations, ceremonies, and affirmations that will enrich both the novice and the experienced practioner seeking out new views of myth, ritual, and healing.

Witchcraft has plenty to offer the homosexual community, according to Penczak (City Magick), a self-proclaimed gay shaman. Not only does it have a strong history of tolerance for homosexuality; it actually has a rich tradition of homosexual involvement and esteem. After finding shame and persecution in the Catholic Church, Penczak fled to the Wicca community, where he found “a sense of belonging… to my own spirit.” This is one of the only books on the market that delves into the fascinating historical roots of gay witchcraft while also providing homosexual-specific advice on spells and rituals. One of Penczak’s strengths is his broad-reaching wisdom when it comes to love and sexuality. Most of his guidance could be relevant to practitioners of all sexual orientations. What witch isn’t interested in knowing a few spells and potions for creating more trusting, loving, passionate and spiritually nurturing relationships? Who wouldn’t love to soak in a “healing heart” bath with pinches of lavender, rose petals, catnip and rosemary? Yet Penczak also stays true to his niche-often returning to particular sexual and romantic concerns unique to the gay and lesbian community. It’s only when he occasionally gets into anatomically detailed discussions about men loving men (in the tantra sexuality section) that he excludes lesbian readers. Overall, Penczak fulfills his promise-finally offering homosexual readers a sensitive and sexually appropriate manual for the study and practice of witchcraft. (June) Copyright 2003 Reed Business Information. – Publishers Weekly 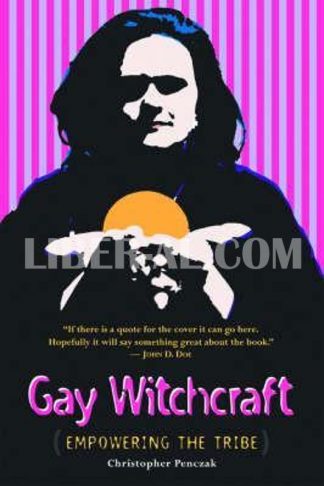 You're viewing: Gay Witchcraft: Empowering the Tribe $18.31
Add to cart