Death hounds, shape shifters, and vampires are among the patients treated by the Holmeslike Dr. Taverner and his assistant Dr. Rhodes in this work of supernatural fiction by acclaimed spiritualist and occult writer Dion Fortune.

First published in 1926, the adventures of Dr.Taverner and Dr. Rhodes take readers across the marshy moonlit fields of nightfall, hunting spirits and keeping watch over souls. Suffering from vampirism? Being stalked by a death hound? Haunted by past life debts? Family under a suicidal curse? From across the countryside patients and their desperate families come to seek treatment for unconventional diseases from an unconventional doctor. His secret? Treating the diseases of the occult.

Though Fortune wrote The Secrets of Doctor Taverner as her first novel, she maintained that all the events were based on true occurrences. Many believe Taverner to be Fortune’s own spiritual teacher, Dr. Moriarty, and Rhodes to be based on Fortune herself.

An essential and fun read for anyone interested in the Western Mystery Tradition, Dion Fortune, the melding of medicine and magic, or just good oldfashioned paranormal fiction.

“Originally a series of ten short stories, this subsequent compilation became Dion Fortune’s first novel. It began her tradition of using fiction as a teaching tool. She claimed that the tales were based on real occurrences and many believe it is an account of her relationship with her own metaphysical mentor. Whether it is fact or fiction is irrelevant. It’s a classic paranormal adventure story, recounted by one of the pillars of the Western Mystery Tradition. In her foreword, Diana Paxson puts the book into the context of supernatural literary history for us. She also likens Fortune’s genius doctor to both Harry Potter and Sherlock Holmes. The book remains timely and fun, and Fortune remains one of the great metaphysical communicators.” Anna Jedrziewski, New Age Retailer July 2011 – Reviews 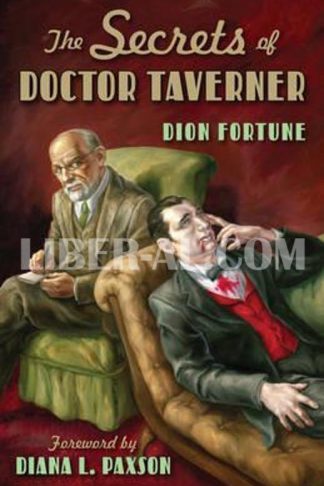 You're viewing: Secrets of Doctor Taverner $15.79
Add to cart
We use cookies to ensure that we give you the best experience on our website. If you continue to use this site we will assume that you are happy with it.Ok