From occult underground to superhero! Was Superman’s arch nemesis Lex Luthor based on Aleister Crowley? Can Captain Marvel be linked to the Sun gods on antiquity? In Our Gods Wear Spandex, Christopher Knowles answers these questions and brings to light many other intriguing links between superheroes and the enchanted world of estoerica. Occult students and comicbook fans alike will discover countless fascinating connections, from little known facts such as that DC Comics editor Julius Schwartz started his career as H.P. Lovecraft’s agent, to the tantalizingly extensive influence of Madame Blavatsky’s Theosophy on the birth of comics, to the mystic roots of Superman. The book also traces the rise of the comic superheroes and how they relate to several cultural trends in the late 19th century, specifically the occult explosion in Western Europe and America. Knowles reveals the four basic superhero archetypesthe Messiah, the Golem, the Amazon, and the Brotherhoodand shows how the occult Bohemian underground of the early 20th century provided the inspiration for the modern comic book hero. With the popularity of occult comics writers like Invisibles creator Grant Morrison and V for Vendetta creator Alan Moore, the vast ComiCon audience is poised for someone to seriously introduce them to the esoteric mysteries. Chris Knowles is doing just that in this epic book. Chapters include: Ancient of Days, Ascended Masters, God and Gangsters, Mad Scientists and Modern Sorcerers, and many more. From the ghettos of Prague to the halls of Valhalla to the Fortress of Solitude and the aisles of BEA and ComiCon, this is the first book to show the inextricable link between superheroes and the enchanted world of esoterica.

“Anyone who wants to investigate the archetypal and esoteric roots of comicsthe secret historycould hardly do better than to read this encyclopedic and uptotheminute study.” Greg Garrett, Prof. of English, Baylor University, and author of Holy Superheroes! and The Gospel According to Hollywood – Reviews 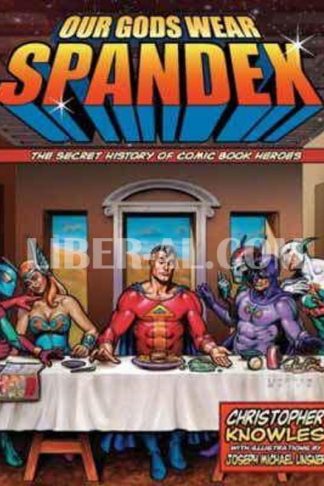 You're viewing: Our Gods Wear Spandex: The Secret History of Comic Book Heroes $18.58
Add to cart