In addition to the fascinating biographical sketch drawn by Richard Kaczynski, author of the classic biography Perdurabo, this book offers Crowley’s teachings in his own words. A carefully chosen series of his instructions for concentration, meditation, magick, invocation, even sex magick are included. Crowley’s descriptions of the teaching Orders A:.A:. and OTO are presented, along with the Creed of EGC. In addition, a suggested reading list of Crowley’s “top-eleven” most important books is enhanced by an extensive bibliography for further in-depth research. This is the first and only introductory book that does not pretend to “improve” upon the Master’s writings, but attempts to showcase them into a coherent introduction to his spiritual system.

.A practicing occultist whose mastery of western magick and eastern mysticism was unsurpassed by any of his contemporaries, and who continues to be an icon for many of today’s practicing magicians.

.The founder and prophet of the new religious movement of Thelema, best known by its oft-misunderstood catchphrase, “Do what thou wilt shall be the whole of the Law.”

.A maverick mountaineer whose numerous innovations and world records in the sport are acknowledged by even his most vocal critics.

.An adventurer whose exploits in the far east were serialized by Vanity Fair magazine as “A Burmese River.”

.An impresario who took the violin troupe, the Ragged Ragtime Girls, on a tour of Russia.

.A British secret agent who marshaled his literary and occult connections to the service of his country, including (reputedly) the invention of the “V for Victory” sign as a magical antidote to the swastika.

.A ranked chess master who could trounce many players without even looking at the chess board.

.A pioneering entheogenic explorer who conducted psychedelic experiments with mescaline.

.Producer and star of The Rites of Eleusis, a series of ritualistic plays featuring an innovative blend of magick, drama, music and poetry.

.One of the most unjustly vilified men in the history of journalism, garnering headlines like “The Wickedest Man in the World” and “A Man We’d Like To Hang.”

More mistruth and rumor has circulated about Aleister Crowley than perhaps any other figure in recent history. When the reporter Henry Hall introduced him to readers of the New York World Sunday Magazine, he wrote, “Some said that he was a man of real attainments, others that he was a faker. All agreed that he was extraordinary.” Crowley openly defied social conventions, challenging people to examine what they really believed, and why they believed it. He confronted blind faith with rational skepticism. Yet he likewise challenged the skeptic with scientific illuminism, a systematic approach to spirituality that he described as “The method of science, the aim of religion.” 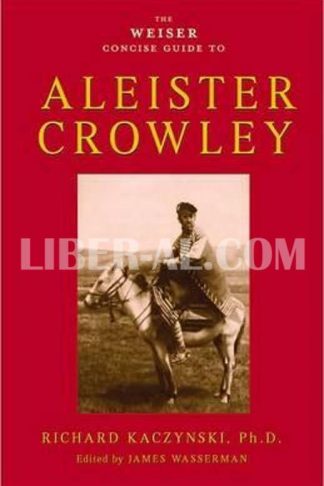 You're viewing: Weiser Concise Guide to Aleister Crowley $11.93
Add to cart
We use cookies to ensure that we give you the best experience on our website. If you continue to use this site we will assume that you are happy with it.Ok