H. P. Lovecraft and the Black Magickal Tradition: The Master of Horror’s Influence on Modern Occultism

Modern practicing occultists have argued that renowned horror writer H. P. Lovecraft was in possession of in-depth knowledge of black magick. Literary scholars claim that he was a master of his genre and craft, and his findings are purely psychological, nothing more. Was Lovecraft a practitioner of the dark arts himself? Was he privileged to knowledge that cannot be otherwise explained?

Weaving the life story of Lovecraft in and out of an analysis of various modern magickal systems, scholar John L. Steadman has found direct and concrete examples that demonstrate that Lovecraft’s works and specifically his Cthulhu Mythos and his creation of the Necronomicon are a legitimate basis for a working magickal system.

Whether you believe Lovecraft had supernatural powers or not, no one can argue against Lovecraft’s profound influence on many modern black arts and the darker currents of western occultism.

“Steadman has written a perceptive, comprehensive, and admirably balanced study of Lovecraft’s connection with occultism. H.P. Lovecraft and the Black Magickal Tradition provides an important and valuable contribution to this highly contentious aspect of his life and work.” –Paul Roland, author of The Curious Case of H.P. Lovecraft – Reviews

“H.P. Lovecraft’s influence on modern horror fiction is indisputable. John L. Steadman explores a more obscure aspect of his legacy, dissecting and analyzing the research into the occult that underpins the Cthulhu mythos, and describing how the rites and metaphysics in Lovecraft’s fiction have influenced the practice of contemporary magic. A fascinating and valuable contribution to Lovecraftian scholarship.” –Paul McAuley, author of Four Hundred Billion Stars (Philip K. Dick Award Winner, 1988) and Fairyland (Arthur C. Clarke Award Winner, 1996)

“John L. Steadman has opened the door to the study of neomythology in H. P. Lovecraft & the Black Magickal Tradition. Funny and dark, cynical and powerful, Mr. Steadman takes on the manyfaced monster that is rising out of the R’lyeh of the collective unconsciousness.” –Don Webb, author and occultist

“John Steadman offers an admirably clear, concise, and comprehensive account of the instances of black magic featured in H. P. Lovecraft’s works, the sources from which he drew his information and–most usefully and most interestingly–the various uses made of Lovecraft’s literary inventions by the numerous modern lifestyle fantasists who have taken inspiration from his fiction.” –Brian Stableford, author of The Devil’s Party: A Brief History of Satanic Abuse

“John L. Steadman’s fascinating look at the intersection of Lovecraft and the occult is both comprehensive and comprehensible–even to the nonoccultist–and provides a wealth of information and inspiration for the aficionado or the practitioner of the weird tale.” –Orrin Grey, author of Never Bet the Devil and Painted Monsters

“Author John L. Steadman’s intriguing book, H. P Lovecraft & the Black Magickal Tradition, is a fascinating and well-researched treatise on the influence of magickal thought with respect to the output of one of the recent giants of Weird Literature. With concision and insight into the historical underpinnings of Black Magick and its adherents, Steadman’s volume is indispensable reading for neophyte Lovecraft readers, longtime fans, or simply individuals with a casual interest in the Old Gentleman from Providence, as well as those curious about the history of magick in literature and in popular culture. A stimulating and informative reading experience.” –Jason V. Brock, author of Disorders of Magnitude

“I am enthralled by this outstanding study. As one who has practiced as a solitary witch, and one who now practices as a weaver of Lovecraftian fiction, I can appreciate this book on many levels. In its approach to biographical matters, it paints an honest portrait of H. P. Lovecraft. A magnificent work!” –W. H. Pugmire, author of Some Unknown Gulf of Night

“John L. Steadman’s treatise H. P. Lovecraft & the Black Magickal Tradition provides a fresh angle of context for the man, the myth, and the legend. A fine addition to the library of any Lovecraft enthusiast, whether or not you believe in magic.” –Cherie Priest, author of Boneshaker and Bad Sushi

“In H. P. Lovecraft and the Black Magickal Tradition, John Steadman has written a compelling and unusual study of the Chthulu Mythos. By locating Lovecraft’s work in the narrative of black magic systems and interrogating the various intersections between the Mythos and real magickal practices, this fantastic book casts new light onto both. A must read for anybody interested in either Lovecraft or black magic, and fascinating for newcomers and scholars alike.” –Tom Fletcher

“At the time of his death in 1937 H. P. Lovecraft was little more than a minor pulp author. He regarded himself as a failure. Three-quarters of a century later he is accepted as a serious figure in American (and World) literature, one whose standing and influence grow almost daily.

But was he ‘merely’ a writer of horror stories, or was there something more to his works? Were his many weird beings and alien gods purely the products of his imagination, or did Lovecraft tap into some greater and more esoteric truth than the average reader of Weird Tales or Astounding Stories realized?

In H. P. Lovecraft and the Black Magickal Tradition, John L. Steadman addresses this question head-on. Whether Lovecraft was himself a practicing, if covert, occultist, as some devotees believe, or solely a practitioner of the tale-spinner’s art, his works fall clearly within the occult traditions of cultural and even supernatural beliefs stretching back to classical Greece, Egypt, and Mesopotamia.

Steadman’s scholarship is impressive and the revelations in his book may well be as shocking to skeptics (including me!) as they are reassuring to believers. I recommend this book unreservedly to any admirer of Lovecraft, whichever camp the reader may belong to.” –Richard A. Lupoff, author of Marblehead: A Novel of H.P. Lovecraft and Lovecraft’s Book

“John L. Steadman’s book is a welcome contribution to an important and neglected subject. Much nonsense has been written about Lovecraft’s involvement with occultism, and Steadman brings a refreshing dose of reason and sanity to the discussion. His thorough understanding of Lovecraft’s life, work, and thought, and his impressive grounding in all aspects of the occult tradition, make him the ideal scholar to address this controversial topic.” –S. T. Joshi

“They say truth is stranger than fiction, but is truth stranger than Lovecraftian fiction? John L. Steadman’s in-depth look on Lovecraft and the occult proves that it is! A fascinating mix of literary criticism, subaltern history, and occult minutiae, even for non-occultists like myself.” –Nick Mamatas, author of Move Under Ground and Love is the Law

“John L. Steadman may well have created the most thorough and accessible study of the occasionally perilous, often credulous, but always fascinating realm where the fictional mythos of H.P. Lovecraft dovetails with occult praxis. H.P. Lovecraft and the Black Magickal Tradition exhibits a blend of scholarly insight and literary panache that is sure to please and enlighten both the Initiate and the weird fiction connoisseur.” –Richard Gavin, author of At Fear’s Altar

“Steadman has written a perceptive, comprehensive, and admirably balanced study of Lovecraft’s connection with occultism. H.P. Lovecraft and the Black Magickal Tradition provides an important and valuable contribution to this highly contentious aspect of his life and work.” –Paul Roland, author of The Curious Case of H.P. Lovecraft – From the Publisher 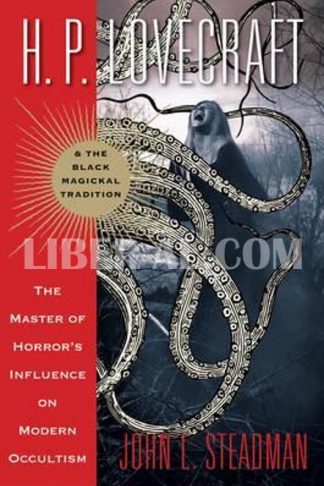 You're viewing: H. P. Lovecraft and the Black Magickal Tradition: The Master of Horror’s Influence on Modern Occultism $21.37
Add to cart
We use cookies to ensure that we give you the best experience on our website. If you continue to use this site we will assume that you are happy with it.Ok