ALEISTER CROWLEY – REVOLT OF THE MAGICIANS: A NOVEL

The dawning twentieth century is not big enough for eccentric genius Aleister Crowley. He is an acclaimed poet, chess master, world-class mountaineer, and probably the most passionately liberated man in Victorian London. His real devotion, however, is magic…and the search for his own soul.

An infamous fourteenth century Arabic book of magic survives the centuries to spawn the formation of a hidden society of magicians in London. The Order is led by occult scholar MacGregor Mathers and his wife Moina, who claim to be in touch with secret masters that give them ever-increasing magical knowledge and power. For several years the Order grows, drawing on new members from the giants of British commerce, art, and literature.

*the poet William Butler Yeats
*the playwright Maude Gonne
*Bram Stoker, author of Dracula
*Florence Farr, the most acclaimed actress of her day
*and one of the wealthiest women in the world, tea heiress Annie Horniman.

Crowley naively joins the Order at the beginning of the revolt. Blinded by his intense spiritual aspirations, he is not only drawn into the conflict, but unwittingly becomes the catalyst that brings about their destruction.

Lon Mio DuQuette is author of 16 critically acclaimed books (translated in 12 languages) on Magick and the Occult, Lon Milo DuQuette is one of the most respected and entertaining writers and lecturers in the field of the Western Mystery Traditions. He is also gifted singer songwriter and former Epic Records recording artist whose material continues to inspire and provoke. Since 1975 he as been a national and international governing officer of Ordo Templi Orientis, one of the most influential magical societies of the 20th Century. He is an internationally recognized authority on tarot and western ceremonial magick. Although he takes these subjects very seriously, he tries not to take himself too seriously. This rare combination of scholarship and humor has earned him in the last 22 years a unique and respected position in American spiritual and esoteric literature. DuQuette appears occasionally on television and radio as a guest expert on subjects involving the occult. He is a contributor to the Magical Egypt DVD series and a host on the new series, The Great Work. He is a faculty member of the Omega Institute in Reinbeck New York, and Robert Anton Wilson’s Maybe Logic Academy. He lives in Costa Mesa, California with his wife of 43 years, Constance. 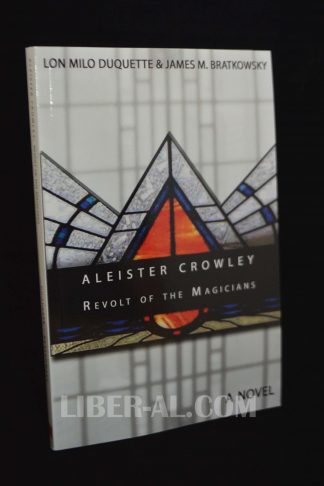 You're viewing: ALEISTER CROWLEY – REVOLT OF THE MAGICIANS: A NOVEL  $15.60
Add to cart
We use cookies to ensure that we give you the best experience on our website. If you continue to use this site we will assume that you are happy with it.Ok