Contains a selection of Crowley’s early published poetry, made by himself and a group of friends. Writing in the Preface, Crowley declared that “IN response to a widely-spread lack of interest in my writings, I have consented to publish a small and unrepresentative selection from the same. With characteristic cunning I have not included any poems published later than the Third Volume of my Collected Works. The selection has been made by a committee of seven competent persons, sitting separately. Only those poems have been included which obtained a majority vote. This volume, thus almost ostentatiously democratic, is therefore now submitted to the British Public with the fullest confidence that it will be received with exactly the same amount of acclamation as that to which I have become accustomed.” Crowley was correct, and the book was widely ignored in literary circles. 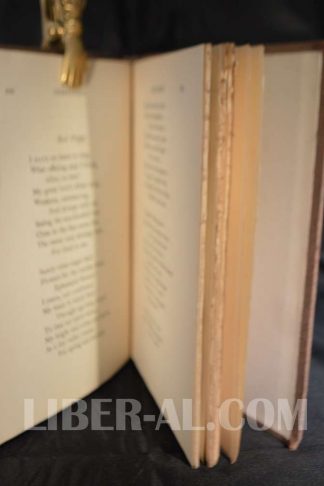 You're viewing: AMBERGRIS  by Aleister Crowley (1910 First Edition) $562.51
Add to cart
We use cookies to ensure that we give you the best experience on our website. If you continue to use this site we will assume that you are happy with it.Ok