THE CHALICE OF ECSTASY (SIGNED)

Based on Wagner’s PARSIFAL, Frater Achad published his unique interpretation of the play in 1923. His exploration of the mysticism and myth of the legend are based in Thelemic teachings. Although Achad did not source his use of the many quotations in text, or the use of certain antiquated terms, Mr. Cornelius has provided nearly 100 footnotes which aid the understanding of the spiritual journey described. This volume is a must for your magickal library.

“The composer Richard Wagner wrote the most influential ‘magickal’ version of the quest for the Holy Grail which he titled Parsifal. Frater Achad (Charles Stansfeld Jones 1886-1950), a Magister Templi 8=3 in Aleister Crowley’s A.’.A.’., published his unique understanding of this play in a book titled The Chalice of Ecstasy (1923).

Achad interpreted Wagner’s Parsifal from a Thelemic point-of-view, showing the original story akin to an A.’.A.’.Adept’s journey from a beginner or Probationer 0=0 to crossing the Abyss and becoming a Magister Templi 8=3 using as examples the writings of Aleister Crowley and others.

This new edition has a lengthy preface by J. Edward Cornelius, also Magister Templi in the A.’.A.’., explaining the Wagnerian Grail mythos and why Achad’s book is so important. Unfortunately Achad gives no sources to the dozens upon dozens of quotes throughout his book, nor does he explain many of his obscure terms, but Cornelius identifies all and adds almost ninety footnotes which help illuminate the spiritual journey portrayed in this classic Thelemic text. For Adepts desiring to climb the Qabalistic Tree of Life, this book is a must for your library. “ 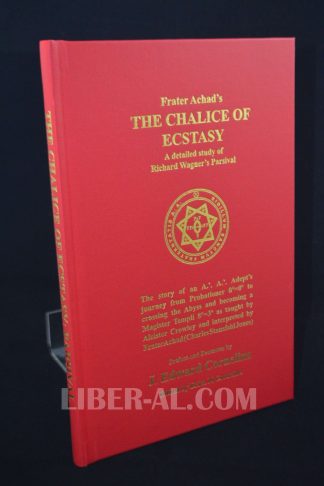