The previous edition of Essays contained eight papers on the first eight paths of the Thoth on the Tree of Life which correspond to the Minerval and First Degree of Ordo Templi Orientis. In Chapter XIII of Magick Without Tears titled “System of the O.T.O.” it states that in Minerval – “The Ego is attracted to the Solar System.” In First Degree the candidate is placed within a Well whereupon – “The Child experiences Birth.” In this issue of Essays No.4 we are concerned with Second Degree. Here Crowley states – “The Man experiences Life.” Whereas Minerval & First Degree O.T.O. represented Birth or the Seed of the Father (Chokmah) being transferred out of the Tent (i.e. phallus) into the Well (i.e. womb) of the Mother (Binah), the Second Degree holds the keys as to how the Son incarnates below the Abyss in quest of Life. In other words, that which transpired Above the Abyss is now being birthed Below. The mysteries of Life are portrayed in only three paths, those of Lust (ט), The Hermit (י) and Justice (ל). These paths unite the three Sepiroth of Chesed-4 (חסד), Geburah-5 (גבורה) and Tiphereth-6 (תפארת). Together they form a ‘Descending Red Triangle,’ which refers to the Anahata or Heart Chakra. This issue will also contain ten other essays besides the three on the Thoth cards. The others are written by either J. Edward or Erica M Cornelius with such titles as ON THE ROLE OF THE ADEPTUS MINOR: In The Palace of the King by J. Edward Cornelius, ON THE BEAUTIFUL PATH by Erica M Cornelius, ON THE ZELATOR by Erica M Cornelius, ON BEING A PATHFINDER by J. Edward Cornelius, ON THE DANGER OF PAWNS by J. Edward Cornelius, ON THE WAYS OF CHORONZON ON SOCIAL MEDIA by J. Edward Cornelius, ON MATTER AND MOTION by J. Edward Cornelius, ON EPILEPSY, HEARING VOICES AND DEJA VU by J. Edward Cornelius, CAN YOU BE THROWN OUT OF THE A.’.A.’.? by J. Edward Cornelius and finally, FAUSTINA, Or, On a Witch’s Flight to Brocken, An Extended Meditation on the Path of the Moon by Soror Absorbeo. Unfortunately, due to continuing problems with the leather bound editions of Essays No.2 & 3, we are forced to go back to the cloth bound version, as in No.1. Sorry. 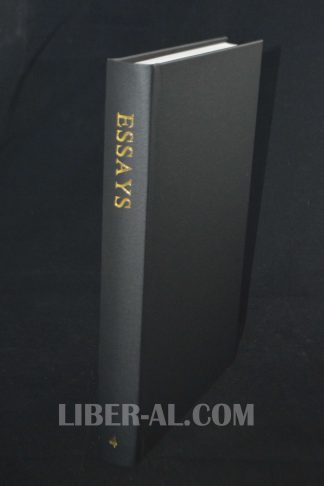