Volume 5 features not only a short taxonomy ON SEX AND CROWLEY’S WOMEN, but also Part I of a ground-breaking, lengthy essay by J. Edward Cornelius called ON THE SCARLET WOMAN. He explains why she’s called a ‘scarlet’ woman, not some other color, and where this color fits on the Tree of Life and the nature of the two Sephiroth which naturally feed the path associated with scarlet. He goes in-depth into the Scarlet Woman’s role found in The Book of Revelation, as well as discussing the truth behind what John Dee (1527–1608) really said about Babalon and the Daughter of Fortitude, often misquoted and taken out of context by modern writers. He also talks about the Scarlet Woman in Crowley’s writings from The Vision and the Voice to Liber AL vel Legis and he explains her role in IX° OTO and AA teachings as the ‘Daughter’ in the formula of the Tetragrammaton (τετραγράμματον) as well as her being Kundry in the Grail mythos. She is the true mistress of The Beast and her role is that of an avatar or one who taps into 3-Binah (בינה) on the Qabalistic Tree of Life which allows her to be in sync with the goddess; As Above, So Below. But for a woman to simply say she is a Scarlet Woman doesn’t make it so. In fact, a woman can no more easily be a Scarlet Woman than a man can easily become a Magister Templi 8°=3, seeing that both are tapping into the same Sephira above the Abyss. In both cases men and women need to establish what Crowley calls the ‘wires.’ Yes, on the most mundane level every woman has the undisputed right to claim the moniker of a Scarlet Woman, similar to anyone taking the Oath of the Abyss; of this no one can object or say nay. Let success be her proof, but as with men who attempt to tap into Binah, there are specific requirements regarding how one channels from Above the Abyss, without which all else is pure ego and leads one down a road toward a magickal burnout, moral decay, insanity, obsession or even worse. Crowley, as the BEAST, knew that the woman must somehow return to the Grail Castle and in doing so she becomes as an avatar of BABALON, but she must learn how to stay there, and that is not as easy as it sounds!

The previous edition of Essays contained three papers relating to LIFE or Second Degree of Ordo Templi Orientis. This edition will detail those paths and the Sephiroth which are related to Third Degree and DEATH. In Third Degree “[The Man] experiences Death” as an Initiation into spirituality. Cornelius details the Thelemic mysteries of Death in the two corresponding paths of the Tarot: those of The Hanged Man and The Devil. These Paths’ lessons teach the Candidate how to let go of his familiar ideas and to dissolve himself, in preparation for creating a new Temple of BABALON in Fourth Degree. This issue of Essays also contains an eclectic mix of other essays, including two that also explore the Death Rites: ON LOVE AND THE WELL OF WYRD and ON LOVE AT THE WINTER SOLSTICE: DEATH RITES AND THE WORLD TO COME by Erica M Cornelius. Another cluster of essays ON CHIRON by Erica M Cornelius introduces the comet Chiron as a potent symbol for Thelemites. Still others are: ON EMBRACING THE DEMONIC; ON PHALLIC WORSHIP AT THE SABBATH: THE MATING OF KING AND QUEEN; ON THE PRACTICUS, Part II; ON SYNCHRONICITY AND CAUSE AND EFFECT; ON MARCHESA CASATI, A BIOGRAPHY; ON LINEAGES OF THE A.’.A.’.; and ON MY MAGICAL DEGREE AND THE TAROT CARDS by J. Edward Cornelius, and ON THE AQUARIAN CURRENT; ON WOMEN’S PATHS; and ON THE NEOPHYTE by Erica M Cornelius. 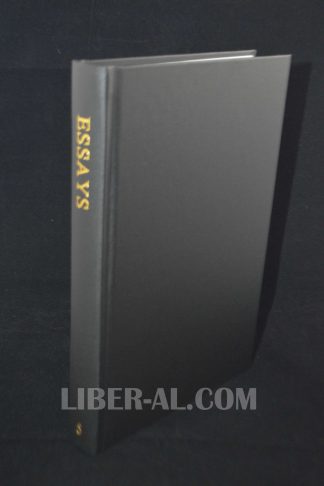