ON GETTING A BULLSHIT METER by Erica M. Cornelius (SIGNED)

“I’m very excited to announce to you: I am publishing my first book titled ON GETTING A BULLSHIT METER. I have poured my heart into it. In my book, I write about the nine-plus years I spent in a cult and the valuable lessons I learned in escaping from it. In many places, what I have to relate is not pretty, neither about myself nor about the cult leader. Yet I share with my readers what I learned and developed by going through the experience. In fact, it is in writing about the experience that I purge my soul, facing my own phantoms and vanquishing them by bringing them into the light of day. Apart from giving my extremely personal revelations about how I ever got involved in a cult, what I was looking for, and why, I also uncover the larger meaning of my experience. My journey was in many ways typical of people living in the present Aquarian age. I look a bit at the history of new religious movements and talk about why these new sects, why now, and why we owe it to ourselves to be very cautious in how we relate to them. I have come to believe that the Aeon of Aquarian universally poses a specific and characteristic task to humanity, although the details are unique to each one of us. For the magickal practitioner, I include some realizations I attained through this experience about how I, as a woman, may work the female formula. That said, I worked hard to make this book clear and enjoyable for the general reader who knows nothing about the occult. Apart from bringing some very difficult life lessons to a positive place by working through them, I write my book as both an inspiration and a warning to others, perhaps especially to other women: do not ever let another person control you, no matter what the reasons given. You can realize your destiny only if you remain independent. Believe in yourself. Believe in yourself!” – Erica M Cornelius.

“In 2016 Erica M Cornelius had risen up to the grade of Adeptus Minor 5=6 in Aleister Crowley’s A.’.A.’.. She had moved into the Qabalistic sphere of Tiphereth-6 (תפארת), or the Sun, on the Tree of Life. It was time for her to learn what it means by the phrase “Every man and every woman is a star.” (Liber AL I:3) Her first goal was to learn that the light of her Star doesn’t always shine unhampered, and just as the light of the Sun in the heavens is occasionally blocked by dense cloud-cover, so too her inner light can be blocked. As an Outer Adept, her goal was to lift these clouds, these shadow-like miasma and phantoms that she has created which controls her ‘personality’ or ego as it relates to those spheres below her Star toward Malkuth-10 (מלכות). Like a scientist she began researching what was real and what was incorrect, vanquishing every aspect of false Knowledge that has hindered or would hinder her growth. Being in the A.’.A.’. is like sitting on a psychiatrist’s couch. It’s not all about doing rituals or taking on some fancy-sounding title as if that alone was proof of an accomplishment. It’s realizing that you’ve chosen an incarnation in order to gain a certain experience. We call this experience our True Will. This book details one woman’s journey and magickal struggle to fulfill the Adeptus Minor’s first obligation, which is learning how to use a Bullshit Meter.” – J. Edward Cornelius

Erica M Cornelius (neé Peterson) was born in Minneapolis, Minnesota in 1970. She attended the University of Minnesota where she was the founder and Editor-in-Chief of the undergraduate philosophy journal Juvenilia, which was published at the university for the first time in the Spring of 1995, the same year in which she graduated from that institution summa cum laude in History and Philosophy (double major). The journal was re-named Agathon in 2002. She moved to southern California in 1995. In June of 2002 she earned a Ph.D. in Philosophy and Science Studies from University of California at San Diego. Between 1995 and 2004 she worked as a college Teaching Assistant or Adjunct Professor, mainly teaching writing and philosophy. She first worked in student affairs back in 1998, when she served as Interim Program Coordinator for the Women’s Center at UC San Diego. Off and on between 1998 and 2012, she worked in that office, the LGBT Resource Center and Services for Students with Disabilities—the last two at UC Riverside. Having been raised as an atheist and skeptic, in around 2000 she began to embrace alternative forms of spirituality, chiefly through practicing western magick. She was the owner and operator of Ananda Books and Gifts in Riverside, California, a new age center and store, from January 2004 to August 2006. A prolific writer and poet, Erica has also at various times worked as a freelance ghost-writer and as a freelance editor, including for academic publications. She moved to Berkeley in April of 2013. She is a philosopher who conducts practical research within western esotericism and a ceremonial magician, psychic and noted astrologer who established Persephone Counseling Astrology, later renamed as Joyful Psyche Astrology. When asked what motivates her in these diverse activities, she says it is an interest in helping each human being uncover and live in accordance with their own deepest values, as only they can define. While in Berkeley she became an initiate of Aleister Crowley’s OTO. She also joined Grady Louis McMurtry’s A.’.A.’. lineage as a Probationer 0=0 on July 21st 2009 assuming the motto Absorbeo 410. She rose up in the degrees and was duly recognized and chartered to run Pure Joy Clerk House on January 4th 2015. The name was taken from Liber AL vel Legis II:9. On February 22nd 2016 she signed the Oath of Adeptus Minor 5=6. She is the Editor-in-Chief and co-author of Essays, a series of hardback books released by McMurtry-Cornelius A.’.A.’. lineage. She married J. Edward Cornelius on August 31st 2015 in Berkeley, thus becoming known as Erica M Cornelius. 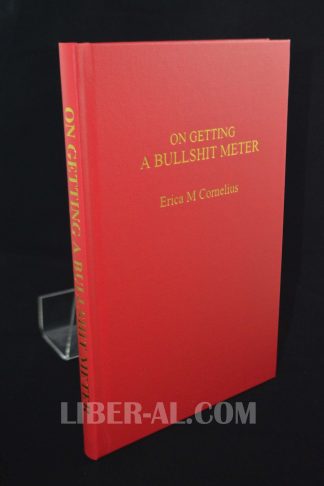 You're viewing: ON GETTING A BULLSHIT METER by Erica M. Cornelius (SIGNED) $48.46
Add to cart