The reprinting of the Typhonian Trilogies continues with the release of the fourth volume in the series, Nightside of Eden, which opens the second trilogy. Nightside of Eden was first published by Muller in 1977, and subsequently reissued with an errata page by Skoob Publishing in 1994. A second edition was issued by Starfire Publishing in 2014, sadly some of these copies were lost in a fire. Freshly typeset in an octavo format of 320 pages, with a frontispiece, a twenty-page section of plates, illustrated endpapers and a full-colour dustjacket, it incorporated the errata from the Skoob reissue, together with further corrections noted subsequently in Kenneth Grant’s personal copy of the book. Where possible, plates were rephotographed, many reproduced in colour for the first time.

There exists a map of consciousness, with its light and dark byways, in the form of a qabalistic glyph known as the Tree of Life. It has its roots in the primal earth of Eden, but its branches extend into extra-terrestrial dimensions. This Tree, which is a familiar concept to mystics and magicians alike, has another side, a nightside which receives but passing mention in contemporary manuals of occultism; as if the ancient writings of the Arabs and Jews contained allusions to mere figures of speech and monstrous fancies.

Nightside of Eden interprets the symbolism of the Tree of Death, the ‘other’ side of the Tree of Life which forms the basis of the Western Occult Tradition. Kenneth Grant, whose Typhonian Trilogies have infused new life and meaning into ancient and forgotten mysteries, here provides an exhaustive survey of the other side of the Tree, haunted by dark forces that are today seeping insidiously into human consciousness and threatening it with violent disruption. The creative magical current represented by Aleister Crowley, Charles Stansfeld Jones, Austin Osman Spare, and in our day by Michael Bertiaux, Margaret Cook, and others, is here traced to its source in the formless voids beyond the threshold of mentation.

Nightside of Eden is an explication of the Cult of Choronzon and an initiated exposition of the Mysteries of the Left-Hand Path in relation to Western Occultism. Here, for the first time, the head of a genuine Magical Organization reveals the esoteric doctrines of the ‘black’ magic of the Left-Hand Path, as well as the practical application of psycho-sexual formulae of which very little is generally known.

The book is illustrated not only with the demonic sigils of the ‘other side’, which make of it a grimoire of the Dark Doctrine, but also by curious works of siderealism, or stellar art, sprung from the New Aeon consciousness which permeates those occult Orders
working in harmony with the Typhonian Tradition. 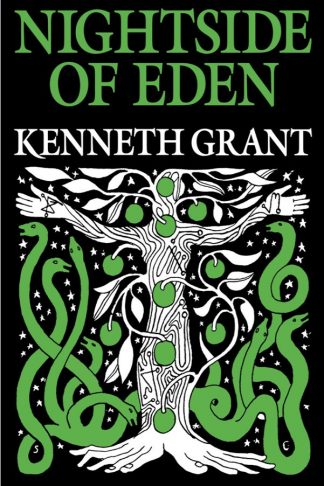 You're viewing: Nightside of Eden (Paperback) $24.98
Add to cart