The Priesthood: Parameters And Responsibilities

“The Priesthood is a condition of a soul on fire with love. The Priesthood is a way of life demanded by a certain level of spiritual responsibility, a way of life that focuses action and non-action toward universal enlightenment.” Thus begins Nema’s moving exposition on the position, responsibilities and rewards of the spiritual territory known as the “Priesthood.” In this writing, she identifies the Priest as a living talisman of the entire human race, a pioneer, an explorer, a trailblazer. Through his/her own experimentations and experiences in self knowledge the Priest builds a formidable citadel of self knowledge crucial in bringing benefit to others. The text creates a net in which the Priesthood, and all of it connotations and denotations, is recaptured and placed squarely again within the context of our living, magickal community.

Nema is an experienced Magickian and mystic, and the author of Maat Magick: a Guide to Self-Initiation; The Way of Mystery: Magick, Mysticism & Self-Transcendence; The Priesthood; Parameters and Responsibilities, and other writings.

She is an Elder and High Priestess of the Circle of the Sacred Grove, Church of Pantheist Wicca, and an initiate of Adi Nath Tantra. She and her husband Lyrus live in southeastern Ohio, in the foothills of the Appalachian mountains. Nema is a founding member of the Horus-Maat Lodge.

Please note for Print on demand please allow several working days prior to shipping for production, the carriers used for these titles will not accept PO. box delivery addresses, once placed orders cannot be cancelled.

ORDER MULTIPLE BOOKS IN THIS CATEGORY FOR SHIPPING FROM AS LOW AS LESS THAN ONE DOLLAR PER BOOK! 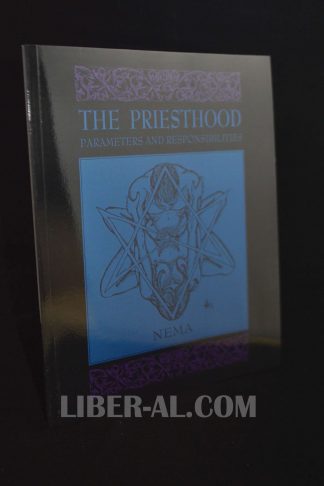 You're viewing: The Priesthood: Parameters And Responsibilities $15.00
Add to cart