The Heretic’s Guide to Thelema Volume 2 & 3

The Heretic’s Guide to Thelema Volume 2 & 3 This is volume 2 and 3 of a new edition of a now classic work from a long-time practitioner of Thelema. It is a expression of his experience in a variety of forms of Thelema and a number of Thelemic institutions. Some will object, and thelemically, they are welcome to do so. But the Magi have always learned from Nature and so we must note that although Nature abhors a vacuum, She hates monocultures: She always and only destroys them. Variety and diversity only will strengthen the current of Thelema. As it is said: Success is your proof. Volume 2: New Aeon English Qaballa first appeared in 2000 and since then it has opened up the way to serious research into the mysteries of The Book of the Law by suggesting a non-Crowleyan solution to one of the most profound mysteries in one of the most profound books of our age. Volume 3: The Ethics of Thelema, was also penned in 2000 out of the author’s desire to share his ethical values as a Thelemite, not with dogma or orthodoxy but how Thelema is working through him as a Thelemite, in the hope that Thelema might be able to explain not only what was wrong with our values, but what values we should consider to prevent looming catastrophe.

Who Is Gerald Del Campo? Gerald Enrique del Campo is a poet, musician, songwriter, photographer, magician, philosopher, author, and lecturer on occult and religious topics. He was a member of the O.T.O. for 20 years and served as Master of ­RPSTOVAL Oaisis and as the Order’s Quartermaster. He was also a member of the College of Thelema, Fraternitas Lux Occulta, and The Hermetic Order of QBLH, and was a founding member of the Temple of Thelema. In 1999 he founded the The Order of Thelemic Knights, a Thelemic charitable organization based on the virtues soldiering and ­chivalry as exemplified by Templarism. Besides New Aeon Magick, Del Campo also wrote New Aeon English Qabalah Revealed and the Ethics of Thelema, forthcoming as separate volumes by Concrescent Press as part of The Heretic’s Guide to Thelema collection. 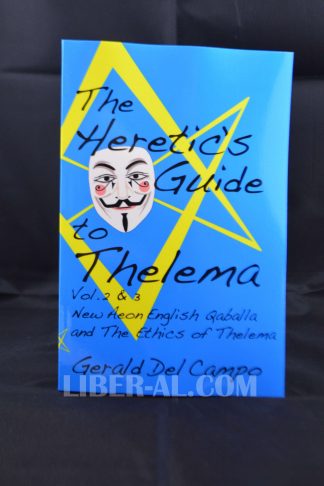