AHAB And Other Poems

Mr. Crowley has amplified the Biblical narrative, has given to the savage figure of Ahab some-thing of the nobility of reason that rebels against the tyranny of his fate. There is a modern self-consciousness in this tragic, brooding monologue. This is mystical poetry of the first order, and contains great depth and tragedy.

Aleister Crowley (1875-1947), who claimed to be the re-incarnation of Dr. John Dee among others, lived in England from 1875 through 1947. He is the author of several Weiser Books titles, including Book of Thoth, Diary of a Drug Fiend, Magick, Book of Lies, Book of the Law and 777 & Other Qabalistic Writings. He was a poet, mountaineer, secret agent, magus, libertine, and prophet – was dubbed by the tabloids “The Wickedest Man in the World.” 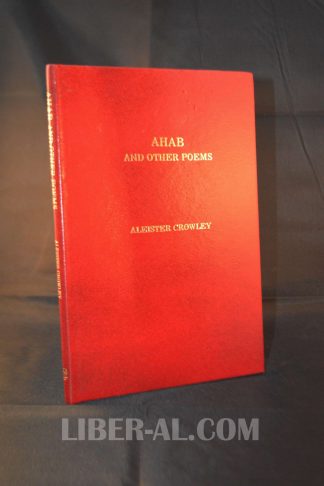