Angels, Demons and Gods of the New Millennium Are angels and demons real? What makes the New Age the New Age? Does consciousness survive death? Writing from the perspective of a practicing ceremonial magician, one of America’s most knowledgeable and engaging authorities on Western Hermeticism answers these questions and many more with humor and personal anecdotes.

One of the most widely respected members of the magic community, Lon Milo DuQuette is known for his ability to address the rather intimidating aspects of magick with a casual candor; he makes the subject accessible to the initiate while still holding the interest of the experienced reader. Angels, Demons & Gods of the New Millennium is a collection of loosely connected essays surveying the state of magick in the face of the new millennium. It showcases DuQuette’s knack for combining wit with profundity, producing chapters such as “Qabalah-Zen of the West” and “Demons Are Our Friends,” while addressing contemporary topics such as initiations and the procession of the equinoxes. 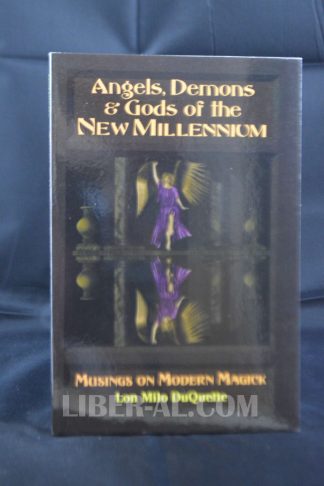 You're viewing: Angels, Demons & Gods of the New Millennium $19.19
Add to cart