This volume offers a selection of papers from the sixth biennial National Ordo Templi Orientis Conference (NOTOCON) of the United States Grand Lodge of O.T.O., held in Salem, Massachusetts, in 2007 E.V. These papers represent some of the best modern practical and scholarly work on Ordo Templi Orientis, Thelema and Aleister Crowley, and cover diverse topics including ritual, history, symbolism, feminism, popular culture and textual analysis.

Highlights include the address given by U.S. National Grand Master Sabazius, and a personal memoir of NOTOCON VI by Crowley’s grandson, jazz pianist Eric Muhler.

The first NOTOCON took place in 1997 in Akron, Ohio. It has since been held on alternate years in different cities around the United States. This volume for 2007 commemorates NOTOCON’s ten-year anniversary and marks the first time that a selection of papers from the National Conference has been made available in print.

Founded in the early 20th century, Ordo Templi Orientis is an international fraternal order of men and women devoted to the pursuit of individual liberty, the study of Magick, and the promulgation of the Law of Thelema. It has been influenced by leading lights such as Karl Kellner, Theodor Reuss, Aleister Crowley, Karl Germer and Grady Louis McMurtry. 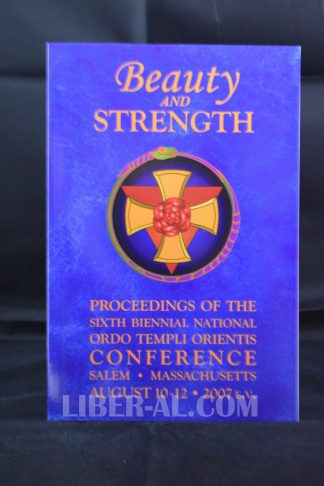 You're viewing: Beauty and Strength: Proceedings of the Sixth Biennial National Ordo Templi Orientis Conference (Notocon) $12.23
Add to cart
We use cookies to ensure that we give you the best experience on our website. If you continue to use this site we will assume that you are happy with it.Ok