Traditional Qabalistic sources can sometimes be difficult to read. This text uses humourous anecdotes and metaphors to teach a practical approach to learning the traditional wisdom of this arcane system.

“A Dilettante’s Guide to What You Do and Do Not Need to Know to Become a Qabalist”, The Chicken Qabalah purports to be the teachings of Rabbi Lamed Ben Clifford, who in reality is an alter ego of Lon Milo Duquette’s. Fed up with “authorities” in this burgeoning occult field who waste readers’ time with such pointless (if impressive) tasks as ‘counting the Nostril Hairs of God’, Lon’s very funny and very practical Chicken Qabalah empowers the would-be Qabalist to remember and distinguish between what is important in Qabalah—i.e., the idea of Unity—and what is not—i.e., almost everything else. Along the way, readers will giggle themselves silly through this truly funny book, and discover at its end that they have learned more Qabalah by accident than they ever would by studied intent. If one had to select just one of the treasures this book offers to encapsulate its message, it might be this: “…[W]e are not Qabalists to prove the Bible is holy—we are Qabalists because everything is holy. Look hard enough at anything and you will eventually see everything! Right now—right where you are, God is talking to you from the pages of the Bible, the Koran, the Vedas—from the funny papers, billboards, street signs, ticket stubs, and automobile license plates.” Lon Milo Duquette, always an edifying delight to read, is the author of The Magick of Thelema, The Tarot of Ceremonial Magick, Angels, Demons and Gods of the New Millennium, and the autobiographical My Life With the Spirits. 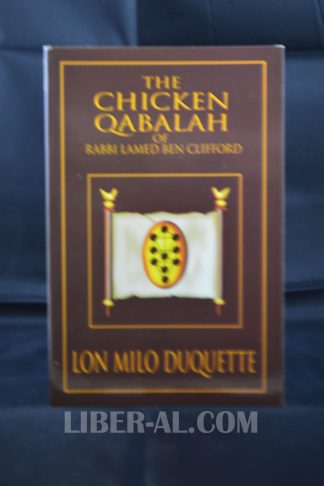 You're viewing: Chicken Qabalah of Rabbi Lamed Ben Clifford (Signed & Inscribed) $31.04
Add to cart
We use cookies to ensure that we give you the best experience on our website. If you continue to use this site we will assume that you are happy with it.Ok