CORNELIA NO.1 :THE MAGAZINE OF THE MAGICKAL, MYSTICAL AND OFTEN PERSONAL WRITINGS OF J. EDWARD CORNELIUS AND ASSOCIATES (SIGNED)

This is a magazine about possibilities. Although the cover may dredge up images of something evil or sinister, in point of fact, it is an actual true reflection of the method used in attaining godhood. The illustration is that of a deity known as Baphomet; half myth and bathed in a hundred possibilities regarding his origin and the meaning behind his name. Still, regardless of what historians write, magicians have their own beliefs.

Baphomet is an entity who teaches the measure between Heaven and Earth, the Macrocosm and Microcosm, between us and the Gods.

He is properly called The Father of the Temple of Universal Peace Among Men, which in Latin is Templi Omnium Hominum Pacis Abbas.
The mystery of his name is seen by taking the following eight letters of each Latin word, or TEM O H P AB, and then reversing them to get BAPHOMET. The Temple mentioned is our human body. In many ways Baphomet represents everyone’s daimon or Holy Guardian Angel. He is our internal voice, regardless whether it offers good or bad advice; which simply chatters inside our head; a voice which does not appear to anyone else, but only to the thinker himself. Although he could be, Baphomet is not necessarily malefic, wicked or even an evil inhuman entity. In truth, he is neutral; androgynous, neither male, nor female, but both at the same time; the seed of All possibilities.

In the Introduction to The Book of the Sacred Magic of Abramelin the Mage (1898) Samuel L. MacMregor-Mathers informs us that the system of communicating with our Angel enlightens us to the fact that man is merely the “bridge” or “natural controller of the middle nature between the Angels and the Demons, and that therefore to each man is attached naturally both a Guardian Angel and a Malevolent Demon.” He goes on to point out that the Demon “is derived from the Greek Daimon.” Sadly, most individuals who quest for their Angel total ignore the premise that they might have been given a Demon at birth, as well as an Angel. Yet this is one of the most important foundation stones to the sacred art known as the Knowledge and Conversation of the Holy Guardian Angel. In fact, this magickal system is one of the few which acknowledges that man was given a ‘daimon’ but true to form; by the time the Sacred Magic of Abramelin the Mage was written, Christianity had already vilified the daimon into a fallen Angel or Demon. The questions that we will be asking are whether or not this Angel actually fell and if not, does that mean we all have two Angels and, if so, “How do they interrelate?” Ah, so many questions and we shall attempt to answer the majority throughout the first issue of this magazine and in future issues. The bottom line is that Baphomet is neutral and, like our daimon, he can take us to heights of heaven or keep us bound on Earth.

Being both the editor to this magazine and the present head of Grady Louis McMurtry’s AA lineage makes this publication far more ‘personal’ for me than for others, which is why I have chosen the titled CORNELIA. This is a Latin word referring to the feminine gender or opposite of the male equivalent known as Cornelius, which is my last name. The latter represents my mortal shell or the incarnation of J. Edward Cornelius while Cornelia implies, in this case, my eternal female which lies within. Between these two poles lies my ‘genii.’ To the Romans this internal spirit was something fleeting but found in all things. Its whisperings were believed to be the source that guides us in our higher actions. According to Roman Mythology the genii could be a guardian spirit of a person, an object, a place, or even a family. It was said that individuals who accepted the guidance of a particular genii become possessed by extraordinary intellectual and creative powers, the source of which was called the ‘genius.’ The Corneliuses, like every family, are guided by a special ‘genius’ or guardian spirit. In ancient Rome this particular family genius is referred to by the initials GPC or Genius Populi Cornelia, or Genius of the Cornelius People. I have adhered to its whisperings most of my life and this magazine is the teaching tool of my discoveries which I teach within Grady Louis McMurtry’s AA lineage.” 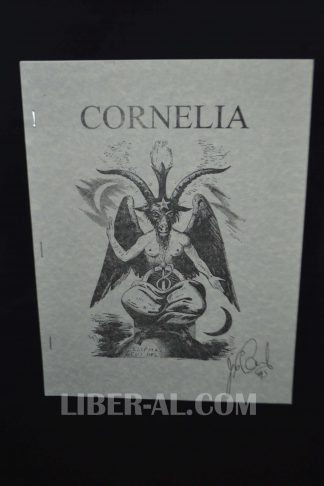 You're viewing: CORNELIA NO.1 :THE MAGAZINE OF THE MAGICKAL, MYSTICAL AND OFTEN PERSONAL WRITINGS OF J. EDWARD CORNELIUS AND ASSOCIATES (SIGNED) $102.50
Add to cart