ESSAYS No.7 Including THE WARRIOR TROUBADOUR: A Biography of Grady Louis McMurtry (SIGNED)

Privately Printed, Berkeley, California, USA 2018. Hardcover. Limited Edition, limited to 200 signed hardcover copies. Cloth bound, no dust jacket. A series of essays from the private archive of the A.’.A.’. Lineage who brought you Red Flame, A Thelemic Research Journal, The Aleister Crowley Desk Reference and The Magical Essence of Aleister Crowley and many other classics. Signed limited edition. Brand New/Fine.

We begin with “THE WARRIOR TROUBADOUR: A Biography of Grady Louis McMurtry.” This piece was originally published in Red Flame, A Thelemic Research Journal No.1 (1994) in an issue titled “The Poetry of Grady Louis McMurtry.” To me, Grady was such a remarkable man, and I was shocked at how little people really knew about him back in the early 1990s. I wanted to give Grady the recognition he so wholeheartedly deserved. In this light I wrote a biography about his life in general, his time spent at Agape Lodge O.T.O., his meetings with Crowley and his other interactions with Thelemites right up to death. This new version published in this book is slightly edited, with added information.

After Grady’s biography we include an essay titled ON THINKING BACKWARDS, MAGICKAL MEMORY AND CAUSE AND EFFECT by J. Edward Cornelius. After this essay we include part III, Section XV of “ON THE SCARLET WOMAN,” being the conclusion. Part I appeared in ESSAYS No.5 and included sections I-X, while Part II or sections XI-XIV appeared in ESSAYS No.6. The series has been a great success in exploring the topic of the woman from numerous angles which we hope has given the reader much food for thought. The entire series is leading up to ‘N’ in the word ‘ON,’ which according to Aleister Crowley conceals the mysteries of 156. On that note, after the Scarlet Woman essay we include N, FOURTH DEGREE and the PRINCE OF JERUSALEM where we shall explore the four paths of The Tower, Death, The Wheel of Fortune and The Hierophant (Revisited). These paths are ruled by the Hebrew letters of Peh (80-פ), Nun (50-נ), Kaph (20-כ) and Vau (6-ו), which work off the Right-Hand Pillar, add to 156 and Balance the Left-Hand Pillar which adds to 418. We’ll also discuss how the Right-Hand Pillar teaches us the mysteries of Fourth Degree and the Prince of Jerusalem. In III O.T.O. one is not taught about Death as much as one is taught how to die. It is in IV where one learns the truth behind the path of Death or, more properly, the path of Return.

We conclude this issue with the following essays:

1.“On the Fifty Gates of Understanding and Their Importance in the New Aeon” by J. Edward Cornelius. This essay records how the fifty Gates are the basis of all of Torah, or Laws, and it is said that achieving just a few of these “gates” would make one a wise person. On a simplistic level, they represent a progression of Knowledge from the most mundane to the most sublime, with the fiftieth level being the highest. These Gates reveal the hand of God in every aspect of existence. They vanquish the illusion of a Godless world, and provide access to the most important, yet hidden aspects our potential.

2.“On the New Daughter: New-Aeonic Change in the Tetragrammaton Formula” by Erica M Cornelius. In the Thelemic aeon the second Heh, or Daughter, of the Tetragrammaton formula has changed compared to previous aeons. This change has practical repercussions for how both men and women do magick now. Crowley summarizes the change by saying that the Daughter may now be raised onto the Throne of her Mother and awaken the Eld of the All-Father. The author explains what this means and gives some practical hints for working the new formula in a male versus a female body.

3.“On Character as Cause” by Erica M Cornelius. In this essay Erica discusses how your character has shaped every last event of this lifetime since the moment you entered your mother’s womb. As an A.’.A.’. student, you begin the horizontal Thelemic practice of thinking backward to discover your character as cause within the man of Earth grade, in part by keeping a magickal diary and in part by studying the First House of your birth chart. However, the search for character as cause is a lifetime study, the only thing that will keep you grounded and balanced as you climb the Tree of Life.

4.“On the Square” by J. Edward Cornelius may seem like a paradox, yet an Adept who would find God by climbing the Qabalistic Tree of Life mostly looks down. That is, an Adept does not find God in the Heavens; an Adept finds God in God’s manifestations down through the Sephiroth and ultimately upon Malkuth. Further, the Adept does not find God all at once; the Adept finds God throughout his or her entire lifetime, by developing an intimate and unique relationship with God’s manifestation. In a vertical School such as the A.’.A.’., the purpose of attaining higher degrees is not to wave ever-more-impressive pieces of paper, but to attain loftier vantage points from which to relate to the mystery within manifestation. Regardless of how high she or he ultimately climbs on the Tree, the Adept’s lifelong work is to clean and strengthen the Temple of manifested body and Universe, in order that God may dwell within.

5.“On What it Means to ‘Go Within’” by Erica M Cornelius. In our A.’.A.’. lineage we talk a great deal about verticality or “going within.” It is important to understand that “within” is not a place or location, especially not as opposed to “outside of me,” but a way of thinking.

6. “On Polarity” by J. Edward Cornelius details how we can attract anything to ourselves by formulating our etheric or magnetic shell as the opposite. Solve et Coagula; banish often, evoke often, but always with Intent and in conformity with one’s True Will.

7.“On the Stimulation of the Muladhara Chakra” by J. Edward Cornelius. In this essay we discuss how the practice of yoga, or union of Mind and Body, begins with awakening the Kundalini into the Muladhara Chakra and continues by raising the Kundalini in a controlled fashion through a combination of mental focus and proper use of sexual energy. In this essay, the author outlines this process in relation to A.’.A.’. grades and their corresponding Sephiroth on the Qabalistic Tree of Life.

8.“On Knots” by J. Edward Cornelius. In Tantras there are three psychic “Knots” which, unless untied, will indisputably become obstacles on the path preventing an ascent of the Serpent Power through the Sushumna, or Middle Pillar.

9.“On Why Adepts Write Autobiography” by Erica M Cornelius. Adepts write autobiography in order to discover their True Will, that universal function for which they incarnated.

10.“On How to Avoid Superstition While Embracing Spirituality” by Erica M Cornelius. Vertical spirituality requires an Adept to marry ruthlessly objective self-observation with an utterly subjective standard of meaning. As an example, the author examines the inner workings of a magickal Oath.

11.“On the Magickal Motto” by Erica M Cornelius. A magickal motto must be adopted by an Aspirant entering the A.’.A.’. as a Neophyte. The choice could not be more crucial. A well-chosen magickal motto can greatly aid the Aspirant in their quest. A poorly-chosen motto can quickly wash the Aspirant out of the Order or even off of the spiritual path entirely.

12.“On Crossing the Planes” by J. Edward Cornelius. Confusion often begins in the A.’.A.’. where initiates work out of Yesod (יסוד) and Malkuth (מלכות). Here they fail to remember that there are at least two Trees. One Tree of Life is macrocosmic, the other microcosmic, and while in the man of Earth grade these Trees are worked simultaneously. If an initiate learns the lesson of Life, as taught in such degrees as Second Degree O.T.O., they would have learned the Laws which state that everything must be in its proper place, perfectly Balanced.

13.“On Writing the Magickal Essay” by Erica M Cornelius. To write the magickal essay is simultaneously to explore self and to commune with one’s God.

14.“On the Three Hierophantic Tasks” by J. Edward Cornelius. On the tasks and expectations associated with each of the three A.’.A.’. grades. 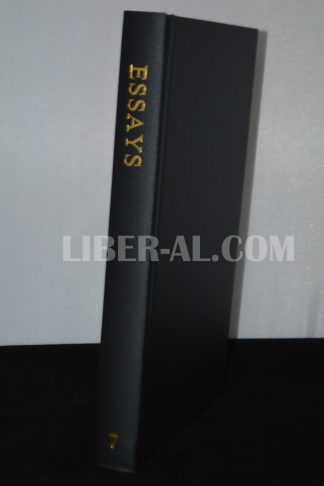 You're viewing: ESSAYS No.7 Including THE WARRIOR TROUBADOUR: A Biography of Grady Louis McMurtry (SIGNED) $82.83
Add to cart
We use cookies to ensure that we give you the best experience on our website. If you continue to use this site we will assume that you are happy with it.Ok