Essays No. 8 Including On Art, Enochian magick, Thelemic ethics, On Revealing OTO Secrets, Norman Mudd, On Being a Black Brother, and One Truth, Filled with Lies (SIGNED)

Privately Printed, Berkeley, California, USA 2019. Hardcover. Limited Edition, limited to 200 signed hardcover copies. Leather bound, with gilt titling to spine, no dust jacket (as issued). A series of essays from the private archive of the A.’.A.’. Lineage who brought you Red Flame, A Thelemic Research Journal, The Aleister Crowley Desk Reference and The Magical Essence of Aleister Crowley and many other classics. Signed limited edition. Brand New/Fine.

“This is one of the most important volumes we have released so far. The ancient Alchemists expressed the secret behind magick in their formula ‘Solve et Coagula.’ Arguably the ‘et’ refers to the Magickal Link, which is symbolized by one of the most important Qabalistic Paths of Wisdom on the entire Tree or Samekh (֑֑ס). In his substantial essay “On Art,” continuing his ongoing Tarot Path series, J. Edward Cornelius illuminates this path’s necessity in IX° OTO and, indeed, in of all magick. Samekh spelled out as סמך can enumerate to 120, the same as ON.

This volume also contains a solid essay on the theoretical and practical foundations of Enochian magick by J. Edward Cornelius. At a time when too many foolish magicians rush unprepared into Enochian magick, Cornelius stresses a few critical points. He points out the basic role of the solar elemental tides in that complex system. He also reminds the practitioner to distinguish the new-Aeonic features of Enochian from the old-Aeonic. Most importantly, he reminds practitioners that Enochian magick is above all a spiritual pursuit. To approach it without the proper spiritual foundation is to invite dreadful and irreversible consequences—burn-out and worse.

The next three essays explore the very foundations of Aleister Crowley’s Thelema, not so much historically as philosophically. The first is a 1902 essay written by the first prophet himself: “בראשית [BERASHITH] An Essay in Ontology: With Some Remarks on Ceremonial Magic.” This essay is one Crowley referenced again and again throughout his lifetime—including in Chapter 0 of Magick in Theory and Practice, and in most of his other major works as well. It is the basis of his magick—required reading for Thelemites. In it, he argues for a particular understanding of the Universe as Absolute Nothingness. This essay puts forth a driving image compatible with Qabalah, and its arguments ultimately serve as the philosophical grounding of Thelemic spiritual practices. The second essay in this cluster is “On Crowley’s Guiding Theory of the Universe as Absolute Nothingness: ‘Berashith’ Before and After The Book of the Law” by Erica M Cornelius, a Philosophy PhD. It explains the ins and outs of Crowley’s “Berashith” argument in the plainest language possible and shows how Crowley reinterpreted the argument Thelemically once he accepted The Book of the Law. This essay helps Adepts understand how Crowley sees the True Will functioning in an incarnation and how the basic structure of a ceremonial magick Temple helps an Adept function in alignment with that True Will. The third, brief essay of this cluster, also by Erica M Cornelius, extends the insights of Crowley’s “Berashith” to the central Thelemic practice of ThIShARB—tracing back the causes within one’s lifetime to their Source in the Absolute Nothingness. Titled “On Getting Something from Nothing: The Importance of ThIShARB,” the essay explains in terms of “Berashith” why the horizontal ThIShARB practice is so critical for balancing an Adept’s vertical climb up the Tree of Life.

This volume of Essays also features a few works in applied Thelemic ethics. Back in Grady Louis McMurtry’s day, Thelemites constantly referred to Liber AL vel Legis in discussing how to behave Thelemically. Debate, discussion, exploration. “What does The Book of the Law say? How do we interpret it?” When Bill Breeze took over the OTO (Ordo Templi Orientis), he emphasized the Tunis Comment and put an end to public discussion of The Book of the Law. Inevitably, as checks against foolish, pick-and-choose interpretations were removed, Thelema became popularly defined as “Do whatever thou want.” Thoughtful Thelemic ethics went by the wayside. We hope these essays in applied Thelemic ethics inspire you to return to Liber AL over and over again to ponder how to behave as a true Star, and to discuss the same with your fellow Thelemites. “Centre of pestilence”? Go for it. The relevant essays are “Being-with the Unfit” and “On Political Correctness on College Campuses: A Thelemic Perspective on the Bret Weinstein Controversy,” both by Erica M Cornelius, and “On My Thelemic Rights” by J. Edward Cornelius.

A final grouping of essays in this volume concerns OTO mysteries. Two are by J. Edward Cornelius. “On Revealing OTO Secrets: Where Do Minervals Begin, Chokmah or Malkuth?” tackles the silliness of the post-Grady OTO’s chakra–degree attributions, which not only contradict Crowley’s teachings but also render Crowley’s symbolism incoherent. “On Maimonides” presents the biography of the eminent 12th-century Jewish philosopher in a manner that illuminates the transition between OTO III° and IV°. The third essay concerning OTO mysteries is The Eucharist (1912) by the Belgian occultist Georges Le Clément de Saint-Marcq (1865–1956). Although this piece was published as a pamphlet eight years after the OTO was established in Germany by Karl Kellner and Theodor Reuss, it was embraced by Reuss as very much consonant with the sexual mysteries of spirituality preserved in that Order. For instance, Reuss refers to The Eucharist approvingly in a 1914 article on the Holy Grail within Richard Wagner’s festival play Parsifal, which premiered in 1882, when Reuss himself performed.

The many other essays don’t fall neatly into any one category. Some do deserve special notice, though. For instance, we’re pleased to offer a short biography on Norman Mudd (1889–1934). Mudd played an interesting and notable role in Crowley’s A.A., yet little is written about him. We are also republishing, with added information, a collection of Crowley’s limericks that was previously published in Red Flame No. 6, The Foolish Issue. The world deserves to be tortured with Crowley’s limericks (appropriately perverse and, occasionally, unkind), so we obliged! Also deserving special notice, is Jerry’s “On Being a Black Brother.” Although it details what can go wrong after someone takes the Oath of the Abyss, in doing so it contains helpful suggestions for the spiritual practitioner at any stage. Finally, we’d be remiss if we didn’t mention J. Edward Cornelius’ review of Keith Readdy’s One Truth, One Spirit (2018). In it, Cornelius addresses his critics’ pleas, “But what do you think of the ideas in the book?” Still, the title of the review communicates the thrust of his comments: “One Truth, Filled with Lies.” Darn that Cornelius for continuing to defend Grady’s honor from people who have a bridge to sell you. Enjoy!” 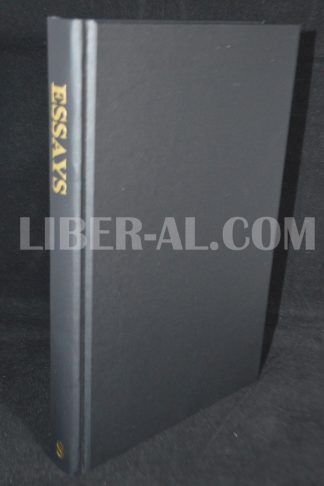 You're viewing: Essays No. 8 Including On Art, Enochian magick, Thelemic ethics, On Revealing OTO Secrets, Norman Mudd, On Being a Black Brother, and One Truth, Filled with Lies (SIGNED) $81.52
Add to cart
We use cookies to ensure that we give you the best experience on our website. If you continue to use this site we will assume that you are happy with it.Ok