Essays No. 9 Including On The Grid in Liber AL vel Legis, switching The Emperor with The Star Explained, On Love Girt With A Sword, Tarot Paths and A.’.A.’. Degrees , On the Neophyte, Women, and the Meluina  (SIGNED)

Privately Printed, Berkeley, California, USA 2021. Hardcover. 320 pages. Limited Edition, limited to 200 signed hardcover copies. Cloth bound with gilt titling to spine, no dust jacket (as issued). A series of essays from the private archive of the A.’.A.’. Lineage who brought you Red Flame, A Thelemic Research Journal, The Aleister Crowley Desk Reference and The Magical Essence of Aleister Crowley and many other classics. Signed limited edition. Brand New/Fine.

This second-to-last planned volume of Thelemic ESSAYS J. Edward Cornelius continues his comprehensive Tarot series. In particular, this volume features his essays on two foundational man of Earth paths energizing Kundalini—The Emperor and the Sun. In these pieces, he details the principles according to Aleister Crowley and others to be worked by a practitioner before building the Rainbow Bridge between the man of Earth and the Lovers. (Cornelius’ final essays on the Rainbow Bridge will be covered in Essays 10.)93

Some additional essays by J. Edward include “On the I Ching Sticks Used by Aleister Crowley”; “On the Grid of Liber al Vel Legis”; “Know Thyself: A Precursor to My Autobiography”; “They Come in the Dark” (a short story). Some Essays by Erica M Cornelius include “On the Four Powers of the Sphinx and the Fifty Gates of Understanding”; “On Thelema and the Egregore”; “On Thelemic Solitary Practice” and On the Yama of Attention.” And these are but a sampling of the insightful, the informative, and the sometimes amusing….

M.G. from Oregon on Essays 9 “staggering” essays: “Dear Erica 93, I’m absolutely blown away with all your essays in #9. ‘On love girt with a sword’ I found helpful and informative. ‘On the Yama of attention’ it filled me with inspiration and excitement. ‘On the interpretation of dreams’ I found cautionary and wise. ‘On the I-ching sticks used by Aleister Crowley’ I’ve made a set and am now more inspired to use them. Your essay on egregore was brilliant and astonishing. I’m grateful both of you have come into my life with your writings. It’s exciting finding magical books that really speak to you and this one definitely did for me. Thank you for all your hard work and time. I can tell that right away that this was a product of awesome gnosis, enjoyment and passion.”  Thank you! 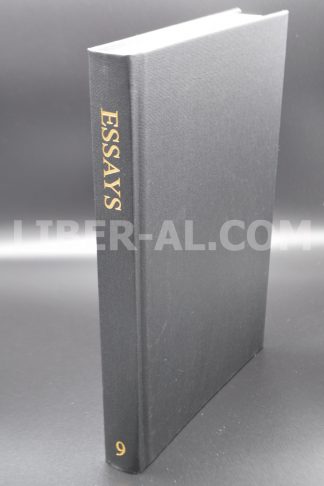 You're viewing: Essays No. 9 Including On The Grid in Liber AL vel Legis, switching The Emperor with The Star Explained, On Love Girt With A Sword, Tarot Paths and A.’.A.’. Degrees , On the Neophyte, Women, and the Meluina  (SIGNED) $81.19
Add to cart