India and the Occult: The Influence of South Asian Spirituality on Modern Western Occultism

India and the Occult explores the reception of Indian spirituality among Western occultists through case studies. Rather than focusing on the activities of Theosophical Society, India and the Occult looks at the ‘hard-core’ occultism, in particular the British 20th century currents associated with Aleister Crowley, Dion Fortune, Kenneth Grant, etc.

“This is a book about the reception of Indian tantric traditions in the context of Western occultism. … a unique contribution to the study of modern and contemporary Western Esotericism. The book is the first academic monograph on receptions of tantra and yoga in the context of occultist magical groups. Its short chapters, written as self-contained essays, make it a useful crash course on this topic. … will be of great interest to scholars and students of modern occultism.” (Egil Asprem, Nova Religio, 2016)

“It’s about time. At last we have a serious, nuanced, and thoughtful book on the central role that India and Indian Tantra have played in the history of Western esotericism, occultism, and magic. Djurdjevic hits all the right notes. He celebrates comparison as essential to any such historical enterprise. He takes up the role of the imagination and the ideal object as keys to any and all human reality posits. He does not dismiss western forms of Tantra and yoga as somehow illegitimate or unimportant. And he focuses, without blinking, on the explicitly sexual dimensions of these practices and figures that have come to shape and define that century and a half long Tantric transmission.” – Jeffrey J. Kripal, author of Esalen: America and the Religion of No Religion

“Djurdjievic’s book is of enormous interest for all scholars and readers who want to understand modern developments in the history of western esotericism, especially from a comparative, cross-cultural perspective. It casts new light on movements and groups that had been very little – if at all – studied before, such as Kenneth Grant’s Thyphonian OTO, Dadaji Mahendranath’s East-West Order, and Mike Magee’s AMOOKOS. It also offers new insight on classic authors such as Aleister Crowley and Dion Fortune, and their relationship with Indian spiritual traditions. Djurdjevic’s expertise in both western and Indian sources makes this comparative study essential reading for all persons who want to understand phenomena of acculturation and globalization in modern western esotericism.” – Marco Pasi, University of Amsterdam, The Netherlands

Gordan Djurdjevic lectures in the Department of Humanities at the Simon Fraser University, Canada. 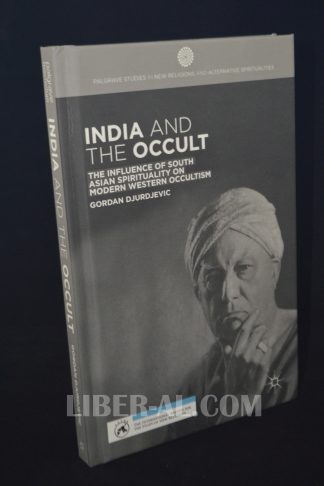 You're viewing: India and the Occult: The Influence of South Asian Spirituality on Modern Western Occultism $95.57
Add to cart
We use cookies to ensure that we give you the best experience on our website. If you continue to use this site we will assume that you are happy with it.Ok