THE LADY WITH THE MAGIC EYES MADAME BLAVATSKY MEDIUM AND MAGICIAN

“HELENA PETROVNA BLAVATSKY: This startling and magnetic woman, daughter of the Russian nobility, probably attracted more attention, more abuse, and more acclaim than any other woman in the latter half of the nineteenth century. Nearly 100,000 acknowledged disciples mourned her death in 1891 and commemorate its anniversary each year as “White Lotus Day”. So international was her following that, when she died, her ashes were divided into three portions – for Europe, America, and India.

The Theosophical Society which Madame Blavatsky created in New York and, together with Colonel Olcott, reorganized in India was founded to form a universal brotherhood of humanity, to explore the hidden powers of man, the inexplicable laws of nature, and to examine comparatively all religions, philosophies, and sciences.

Surrounded continually by a group of brilliant adherents devoted to the study of the phenomenon of spiritualism, Madame Blavatsky exhibited her own incredible powers of producing such phenomena. Her tremendous psychic powers were acclaimed by those who witnessed them while those who had not been witness to her astounding feats did their best to discredit her.

She revealed her teachings in several profound and esoteric publications, among them Isis Unveiled, The Secret Doctrine, The Key to Theosophy – all of mystic inspiration. In these she propounded her theories of the unsolved mysteries of the universe and the evolution of humanity.

Through all ages man has sought answers to the Unknown, and since ancient times occultism has played a large part in the evolution of spirituality. The Lady with the Magic Eyes should prove a fascinating revolation for all those interested in the spirit of man. Madame Blavatsky was a unique woman – and the story of her life is no less unique.” 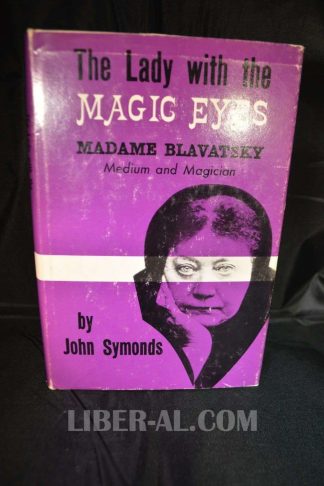 You're viewing: THE LADY WITH THE MAGIC EYES MADAME BLAVATSKY MEDIUM AND MAGICIAN  $41.34
Add to cart