Liber AL vel Legis, published with the original intent of the Astron Argon; along with a thorough study of the manuscript and essays on the book.

“This “Aiwass Authorized” republication of Liber AL vel Legis is intended to address the grave error in the fill/kill controversy.

Paul Joseph Rovelli has devoted his life to the Western Mystery Tradition and the Great White Brotherhood that today operates under the name Astron Argon. Through this spiritual organization, he has founded the Gnostic Church of L.V.X., which is historically, the first Gnostic Church on the continents of the Americas. And for thirty years, Paul Joseph Rovelli has made a deep study of that praeternatural communication from Aiwass, also called: The Book of the Law. The essays in this book are the fruit of this great study.”

Paul Joseph Rovelli formally taught Tarot & Astrology for 20 years in local adult education schools in various communities throughout New Jersey. Today, he runs a major lineage of the A.’.A.’. (Astron Argon); a spiritual lineage serving the edification of humanity. He also runs the Gnostic Church of L.V.X in Hoosick Falls, NY–being the first fully constituted and owned Gnostic church on the American continents. For years his writings have only appeared on his website and FB pages. And through that medium he’s reached every continent in the world and have had varies articles translated into five other languages. 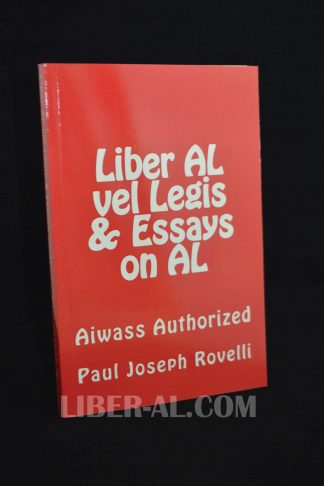 You're viewing: Liber AL vel Legis & Essays on AL: Aiwass Authorized $24.95
Add to cart
We use cookies to ensure that we give you the best experience on our website. If you continue to use this site we will assume that you are happy with it.Ok