“Aleister Crowley, a prolific writer, wrote only a few novels in hi lifetime. Moonchild is his most famous. First published in 1917, Moonchild appeals to the new generation of readers who recognize Crowley as one of the most unique thinkers of his era. The book deals with the endless battle between the Forces of Light and the Forces of Darkness. A young girl is drawn into a magical war between two men and is forced to choose between them. A the story unfold, the reader is taken through an incredible series of magical intrigues involving a Black Lodge.

Writing from his own experienced, Crowley describes the methods and theories of modern magical practices, managing to persuade us that magic is a scientific reality – and that it works. Crowley’s own personality reveals itself in the characters of the Good Magical Masters.

The cover art is courtesy the Ordo Temple Orientis archives. It was originally designed by Beresford Egan for the 1929 edition published by Mandrake Press, and has been modified for this edition.” 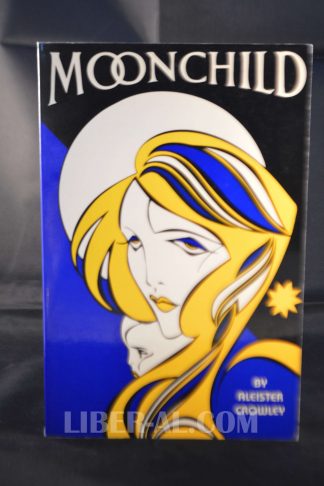