Path of Atavistic Violence is the result of several ritualistic sessions where the author, WxTen, reached that point where the practitioner is in perfect harmony with his or her personal journey towards the Left Hand Path, that point when one starts to destroy the shackles of outside limitations built upon inside weaknesses. It condenses the result of following what the author calls the Primary Atavistic Path of Immediate Violence. This is the shortest and most direct path between the self of an alienated person and his or hers archaic self, uninhibited and free of any obsolete chains. The P.A.P.I.V. aims to achieve total liberation of the inner self and as a consecuence, the total liberation from spiritual and moral constraints.

This volume describes the process followed by the author to create several pieces of Magickal Art, following a Chaos Magick ritual repeated several times in order to find his atavistic primordial self. The result is twenty two paintings filled with the essence of pure Chaos, each one accompanied by a written piece inspired by it. Path of Atavistic Violence is the result of the perfect marriage between Chaos Magick and cathartic Art.

All the texts in Path of Atavistic Violence are written both in English and French. Being a francophone himself, the author considered important to keep the original essence of his work intact, while still offering an English version for the rest of potential readers.

WxTen is known under several names and nicknames, such as Warmachine or GregI. He considers it important to use different names when working on different subjects, may it be occult science, painting or music. As the founder of the Luciferian Order of Chaos (L.O.C.), the artistic work of WxTen fits directly with his esoteric research inside his Left Hand Path journey: no limitation of any kind, no hypocrisy, no remorse… just raw and naked truth at any given moment. Influenced by painters like Rothko, Kandinsky, Pollock and many others, integrity is what counts for WxTen. His pictural truth is often painted as red and black agressions on canvas. Since the colour of blood suits well to an anti-cosmic rebellion which emerges from self-confidence and gnosis gained through darkness and the following of the sinister path, WxTen’s canvases cause an immediate impact in the viewer’s mind and his or her own atavistic instinct. From the Luciferian perspective of returning to the primordial chaos, where the possibility of impossibilities makes sense with an acausal explanation of the universe, this is what you can expect from the art of WxTen: Ordo ab chao. 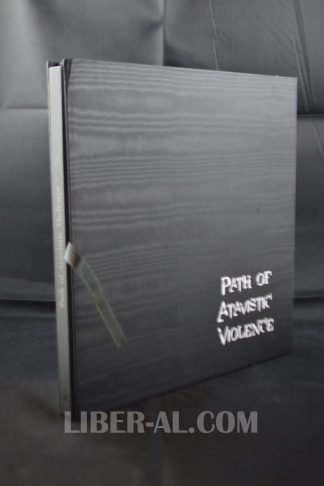 You're viewing: Path of Atavistic Violence $87.07
Add to cart
We use cookies to ensure that we give you the best experience on our website. If you continue to use this site we will assume that you are happy with it.Ok