Rebels & Devils: The Psychology of Liberation

Rebels & Devils brings together some of the most talented, controversial and rebellious people of all time. Some (William S. Burroughs, Timothy Leary, Robert Anton Wilson, Aleister Crowley, Israel Regardie, Christopher S. Hyatt, Austin Osman Spare, Jack Parsons, and Osho Rajneesh) are world famous. Some others (Genesis P-Orridge, Lon Milo DuQuette, S. Jason Black, James Wasserman, Phil Hine, and Richard Kaczynski, Ph.D.) are well-accomplished in their own fields, but are not known in the wider world. Every contributor, every article, in every aspect of their lives has had but one focus–to bring freedom to their world. In all of human history the essence of the independent mind has been the need to think and act according to standards from within, not without. To follow one’s own path, not that of the crowd. Inevitably it follows that anyone with an independent mind must become “one who resists or opposes an authority or established convention”–a rebel. Usually rebellion is done so quietly that no one notices. But when others (especially others with power) recognize the disobedience, the rebel becomes the rebel. And if enough people come to agree with (and follow) the rebel, we have a devil. Until, of course, still more people agree. And then, finally, we have greatness. Until the new unorthodoxy becomes the established norm, and the cycle of rebellion starts up all over again. 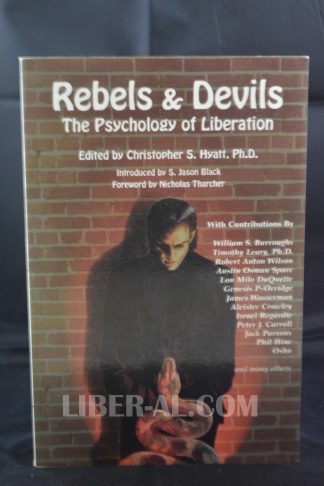 You're viewing: Rebels & Devils: The Psychology of Liberation $34.94
Add to cart