Aleister Crowley, self proclaimed “The Great Beast” and known by the press as “The Wickedest Man in the World”, was perhaps the most controversial and notorious individuals in British History. This dramatically reconstructed film unearths the barely believable and shocking facts surrounding a man who was voted in a BBC poll to be one of the most influential Britons of all time. Was he related to US President George Bush? How was he connected to the founder of Scientology, NASA, The Beatles, Led Zeppelin, Jack the Ripper, Winston Churchill, Ian Fleming and how did this Occultist, Spy, Poet, Writer and accomplished Mountaineer come to know and influence so many other remarkable people?

In Search of the Great Beast 666′ documents the chilling life, impulses and journey of Aleister Crowley (1875-1947), one of the most controversial and mysterious characters of the 20th Century; infamously known as ‘The Wickedest Man in the World’. 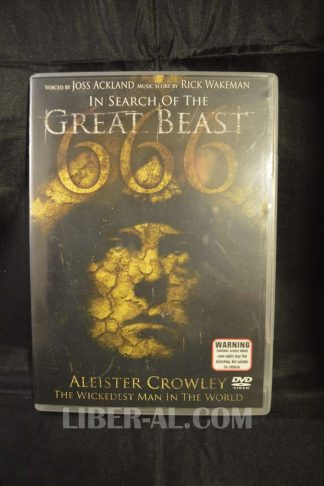 You're viewing: IN SEARCH OF THE GREAT BEAST 666 (DVD) $18.62
Add to cart
We use cookies to ensure that we give you the best experience on our website. If you continue to use this site we will assume that you are happy with it.Ok