Simon Iff is the main protagonist of a series of short detective stories written by occultist Aleister Crowley. He is portrayed as a mystic, a magician and a great detective with a thorough insight into human psychology.

The stories typically revolve around an apparently unsolvable crime, which is eventually untangled by Iff’s magical and psychological logic.

The Simon Iff stories were written during a visit to New Orleans in December 1916, primarily as a means of alleviating Crowley’s financial hardships. The mystic was verging on bankruptcy, a result of his lifestyle, and extravagant self-publishing, while having never earned a wage. The initial collection of six stories which Crowley penned would be labelled The Scrutinies of Simon Iff. Crowley would later write twelve more stories under the title Simon Iff in America, six stories as Simon Iff Abroad, and two final stories as Simon Iff Psychoanalyst. 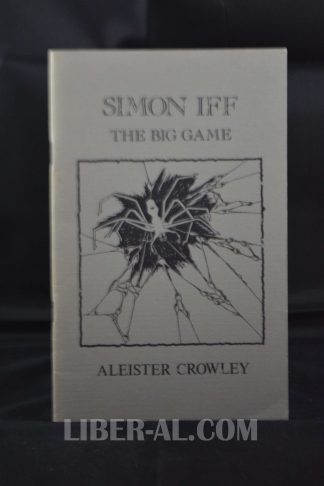 You're viewing: Simon Iff: The Big Game $20.91
Add to cart
We use cookies to ensure that we give you the best experience on our website. If you continue to use this site we will assume that you are happy with it.Ok