In this issue Metaphor, Media, Magick and the Buried Crowley offers a thorough, lively and provocative analysis of Aleister Crowley’s liberating and humane ‘Magick’. The Stellar Lode, another book-length inclusion, is the first of a series of novellas by the distinguished Kenneth Grant. A subtly woven mesmeric tale, it prickles with eerie tensions and intimations of deep magical lore.  In Tentacles Across Time Colin Wilson surveys the enigmatic Mr Grant and the unearthly enlightenment of his esoteric philosophy. Much more in the cornucopia! Ann Rivers unravels the riddles behind an old folk rhyme. George Hay unfolds a story of insectoidal doom. Antares Numi *ON hilariously reports space-age satori in the Antipodes. From Gareth Medway there is a mystical poem, from ‘Mouse’ a lunar ode. Ron Adams reminds us that ‘occult’ implies not lurid trash, but latent wisdom. ‘Amanda Lords’ explores a psychiatrist’s consciousness expanding techniques. The review section discusses books of permanent worth in a manner which explores wider issues suggested by the texts. Argue with controversial Gerald Suster! 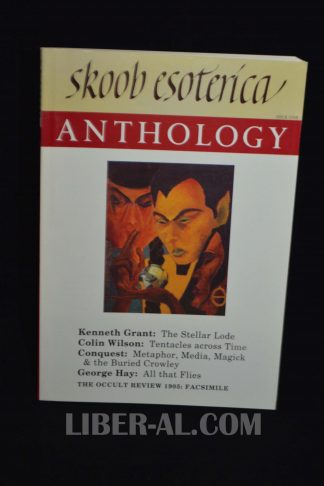 You're viewing: Skoob Esoterica Anthology – Issue One $31.23
Add to cart