The Book of Abramelin: A New Translation – Revised and Expanded

Ibis Press, United States, 2015. Hardcover. Newly Revised and Expanded Edition. 314 pages.  A modern classic of Magic since it was first published in English by Ibis Press in 2006. The new material includes copious footnotes and an extensive index. Brand New.

This is the first modern translation of this critical magical work since S.L. Macgregor Mathers’s original translation over 100 years ago. Not only is the language updated, but Georg Dehn, the compiler and editor, has sourced his work from all extant manuscripts, whereas Mathers used just one. The result is a stunning new translation, which has already set the occult world abuzz. It includes voluminous important material left out of Mathers’ work, including an entire Part 2 filled with magical recipes, important distinctions in the Knowledge and Conversation of the Holy Guardian Angel ritual and completes word grids that had been left half-completed by Mathers.

Abraham von Worms, long thought to be a pseudonymous figure, is nearly conclusively proved to be the well-known 14th century Jewish scholar, Rabbi Jacob ben Moses ha Levi Moellin, and more commonly known as MaHaRIL. Some material attributed to him is still used in synagogues today. 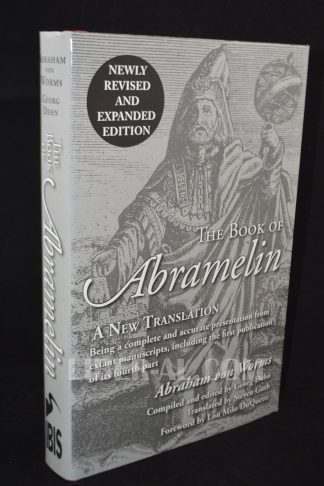 You're viewing: The Book of Abramelin: A New Translation – Revised and Expanded $46.85
Add to cart