“Few twentieth-century writers have fallen into such undeserved neglect as Arthur Machen (pronounced ‘Macken’ – even his name is now generally unfamiliar). Yet in the course of a long life (1863-1947) few have deployed their talents in so wide a field or won the admiration of so many of their contemporaries – ranging, in Machen’s case, from Oscar Wilde to John Betjeman.

Born at Caerlon-on-Usk, in the heart of Gwent, Arthur Machen was a Celt, and therefore a visionary, a mystic, a poet, a seer. But he was also a man of the world who knew something at first hand of that life whose interior meaning he held it to be literature’s business to illuminate and enhance.

This collection brings together the best and most representative of Machen’s writings, from the famous supernatural tale The Bowman, which created the myth of the “angels of Mons’ which first Brough Machen popularity, to his two large-scale masterpieces, the autobiographical Far Off Things with it’s fictional counterpart, The Hill of Dreams, both reproduced here entire and a selection of his vivid journalism and criticism.

This handy volume will not only delight all Machen fans, bu serve to introduce an important writer of the twentieth century to a new generation of discerning readers.”

Arthur Machen (3rd March 1863 – 15th December 1947) was the pen-name of Arthur Llewellyn Jones, a Welsh author and mystic of the 1890s and early 20th century. He is best known for his influential supernatural, fantasy, and horror fiction. His novella The Great God Pan (1890; 1894) has garnered a reputation as a classic of horror, with Stephen King describing it as “Maybe the best [horror story] in the English language”. He is also well known for “The Bowmen”, a short story that was widely read as fact, creating the legend of the Angels of Mons. 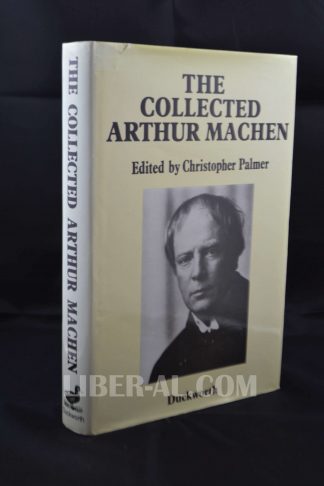 You're viewing: The Collected Arthur Machen $69.82
Add to cart