Well-organized and easy-to-use, The Complete Magician’s Tables can help you understand the vast connections making up our strange and mysterious universe.

These 840+ magical tables are the most complete set of tabular correspondences covering magic, astrology, divination, Tarot, I Ching, Kabbalah, gematria, angels, demons, Graeco-Egyptian magic, pagan pantheons, Christian, Muslim, Jewish, Buddhist, Taoist and mystical correspondences ever printed. It is over five times larger and more wide ranging than Crowleys Liber 777. New columns include the spirits from Fausts Hoellenzwang and Trithemius Steganographia. Types of magic and their Greek identification headwords; the meanings of a wide range of nomina magica; planetary incenses; and the secret names for ingredients, all from the Greek magical papyri. Also the names of the gods of the hours and the months which must be used for successful evocation. The source of the data in these tables ranges over 2000 years, from the Graeco-Egyptian papyri, Byzantine Solomonike, unpublished manuscript mediaeval grimoires and Kabbalistic works, Peter de Abano, Abbott Trithemius, Albertus Magnus, Henry Cornelius Agrippa, Dr John Dee, Dr Thomas Rudd, Tycho Brahe, MacGregor Mathers (and the editors of Mathers work, Aleister Crowley and Israel Regardie), to the mage of classical geometric shapes, modern theories of prime numbers and atomic weights. The sources include many key grimoires such the Sworn Book, Liber Juratus, the Lemegeton (Goetia, Theurgia-Goetia, Almadel, Pauline Art), Abramelin, and in the 20th century the grimoire of Franz Bardon. All this material has been grouped and presented in a consistent and logical way covering the whole Western Mystery tradition and some relevant parts of the Eastern tradition. This is the final update of this volume.

Stephen Skinner began his career as a Geography lecturer and magazine publisher, but his long term interests have always been Western magic and feng shui. During the 1970s he was the driving force behind Askin Publishers, producing a number of classic magical works by Cornelius Agrippa, Paracelsus, Austin Osman Spare, Aleister Crowley, and others. During the 1970s he co-wrote many books with Francis King, including the still popular Techniques of High Magic. Also with Francis King he wrote Nostradamus. His interest in prophecy stimulated by this book, he went on to write the best selling Millennium Prophecies. Stephen is credited with bringing the art of Feng Shui to the West, and in 1976 he wrote the Living Earth Manual of Feng Shui, which was the first English book on feng shui in the 20th century. Stephen has written more than 35 books, which have been published worldwide in 28 different languages. These books have had introductions by such diverse people as Colin Wilson, HRH Charles Prince of Wales, and Jimmy Choo, shoe designer to the stars. Stephen lives in Singapore. Stephen is the first Westerner to be awarded the title of Grand Master of Feng Shui by the International Feng Shui Association. 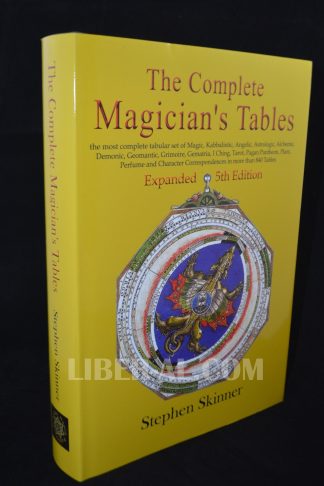 You're viewing: The Complete Magician’s Tables (Hardcover) $58.29
Add to cart
We use cookies to ensure that we give you the best experience on our website. If you continue to use this site we will assume that you are happy with it.Ok