The Cult of Aleister Crowley: Being a True Story of Thelema, from its Beginning until the Present (SIGNED)

“In the Cult of Aleister Crowley J. Edward Cornelius adds over 150 pages to his wildly popular Memoirs of an A.’.A.’. Initiate, Being a True Story of the Struggles for Freedom in the 1990s Against the Restrictionists (2018), quickly sold out . This new edition is no longer just about the A.’.A.’. but has well over 150-pages of controversial OTO information added “

“In this expanded volume, Jerry details the ongoing fight for Thelemic freedom against the Restrictionists in the A.’.A.’. lineage who have taken control of the O.T.O.

So, you may ask, what’s new in this book? Here are just a few samples:

Why is J. Daniel Gunther a Thelemic Pope, according to one of his own lineage members? And did you know Breeze attacked Kenneth Grant and forced him to capitulate any claims to the OTO? And who is Peter Koenig in Switzerland? And numerous ex-Mottaties like David L. Bersson came out of hiding causing Breeze to flee America to Europe where he remains hidden to this day? And how did Dave Scriven become Xth Degree? Also within these pages is the untold truth behind the Provisional IX° and the OTO’s Chakra system is finally fully discussed with no hold barred. So many great stories. Bill Breeze’s claim that Aiwass, the author of The Book of the Law, was not Crowley’s Holy Guardian Angel but merely his “pseudonym” or pen name. Phyllis Seckler discusses Bill Breeze’ 10th House Saturn in a letter dated Jan. 26th, 1969: “Hitler and Mussolini and Napoleon also had the same type aspect. But the aspect also gives a great fall after a meteoric rise.”

What so alarmed James Graeb IX° that he convened a special meeting of the Elector IX°s in a bid to have Hymenaeus Beta (Bill Breeze) removed from office—and how did Phyllis Seckler leverage this into a promise from Breeze to leave the various other A.’.A.’. lineages alone? The full behind-the-scenes, never before discussed info, is presented.

What is the real secret behind the Caliphate, and what happened to the OTO simply because Bill Breeze never knew it?

Why were so many Thelemic movers and shakers under Grady McMurtry, such as Pat King XI°, Allen Greenfield, Dr. Christopher Hyatt IX°, Thelema Coast to Coast podcaster John Crow, Gerald Del Campo, and book dealers Steve Savedow, and Ben Fernee, to mention but a few, thrown out of the Order?

What’s the full story of the “Fill-Kill” controversy?

How come the Tunis Comment turns out to imply that Gunther lineage never had any legitimacy in the first place (if we are to follow their own logic)? Included are numerous essays written by J. Edward Cornelius on this topic.

“Free Will vs Destiny” by Evangeline Adams is discussed, which Breeze claims is not written by Crowley but J. Edward proves otherwise.

What are the latest skirmishes against Freedom lodged by the Restrictionists? Who is Keith Readdy and what are his connection to Boleskine? We include two scathing reviews of his book, One Truth and One Spirit.

Cornelius documents these and numerous other issues, he also fleshes out what he’s already discussed in the previous book to make things clearer. He documents these struggles for generations of new Thelemites. After all, he who forgets his own history knows nothing. We think you’ll enjoy this new volume!

Having been a Thelemite for well over fifty years, I have accepted that it doesn’t take a brain surgeon to realize that the philosophy behind Aleister Crowley’s Thelema offers no sound method for the masses in creating a working society—it’s merely a utopian fantasy concealing a law which maintains, “Let my servants be few & secret: they shall rule the many & the known” (Liber AL vel Legis I:10). It seems like the philosophy was not meant for the masses because the Law of Thelema works only if everyone acts responsibly—but we know, as this book will show, that the vast majority of humanity, especially those within the O.T.O. and A.’.A,’, do not act maturely, nor will they ever reach the spiritual standards of Thelema. The bulk are mere sheep, baaing in a field, fenced in on four sides and unable to perform the simplest tasks of discipline of which Thelema requires.”

This book was originally released as the wildly popular Memoirs of an A.’.A.’. Initiate, Being a True Story of the Struggles for Freedom in the 1990s Against the Restrictionists (2018). It sold out with a month. This new edition, which is not normally signed, is reduced type from 13 to 12-point, and is no longer just about the A.’.A.’. but has well over 150-pages of controversial OTO information added.​ 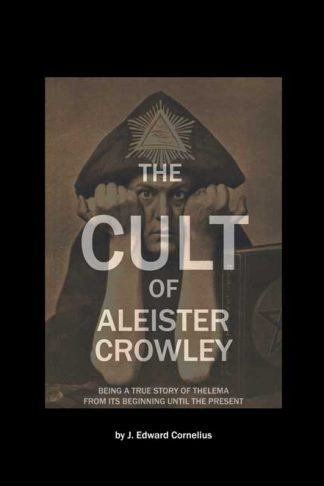 You're viewing: The Cult of Aleister Crowley: Being a True Story of Thelema, from its Beginning until the Present (SIGNED) $44.97
Add to cart