The Magick of Aleister Crowley: A Handbook of Rituals of Thelema

Weiser Books, USA, 2005. Paperback. 304 pages. Formerly titled The Magick of Thelema, this revised edition features extensive corrections, a new introduction, and a new ritual, “The Rites of Eleusis”. This is the perfect introductory text for readers who wonder what the works—rather than the myth—of Aleister Crowley are all about. Brand New.

Aleister Crowley’s ascension into the pantheon of alternative gurus was cemented by his appearance on The Beatles’ Sgt. Pepper’s Lonely Hearts Club Band album cover. Unfortunately, he was known more for his reputation as “The Beast 666” and “The Wickedest Man in the World.” All well and good for publicity, but this infamy eclipsed his teachings, as did his technical and opaque writing style, meant more for adepts contemporary to him than the average modern reader. Enter Lon Milo DuQuette to decipher and explain Crowley’s texts and more important rituals. The Magick of Aleister Crowley is a clear introduction to the works of Crowley by a modern master of the occult and one of the wittiest writers in the field. DuQuette takes the mystery out of both the rituals themselves and Crowley’s writing in this modern grimoire. Step by step, he presents a course of study in plain English, with examples of rituals and explanations of their significance. DuQuette also includes a course of study for Crowley’s original works with an extensive bibliography and fastidious footnotes.

This is an eye-opener of a book. It is a nice guide to Aleister Crowley. Highly recommended reading. — Lee Prosser, Ghostvillage.com

Lon Milo DuQuette has been involved with occult studies since the late 60s and has become an acknowledged and widely-recognized authority within the world of modern occultism. He is the U.S. Deputy Grand Master of the O.T.O. Singer-songwriter and recording artist, Lon Milo DuQuette is also the author of 16 critically acclaimed books (translated in 12 languages) on Magick and the Occult. Critics have called him one of the most respected and entertaining writers and lecturers in the field of the Western Mystery Traditions. Since 1975 DuQuette been a national and international governing officer of Ordo Templi Orientis, one of the most influential magical societies of the 20th Century. He is currently the Order’s United States Deputy Grand Master. He is an internationally recognized authority on tarot and western ceremonial magick. Although he takes these subjects very seriously, he tries not to take himself too seriously. This rare combination of scholarship and humor has earned him in the last 20 years a unique and respected position in American spiritual and esoteric literature. DuQuette appears occasionally on television and radio as a guest expert on subjects involving the occult. He is a contributor to the Magical Egypt DVD series’ and a host on the new series, The Great Work. He is a faculty member of the Omega Institute in Reinbeck New York, and Robert Anton Wilson’s Maybe Logic Academy. He lives in Costa Mesa, California with his wife of 45 years, Constance. 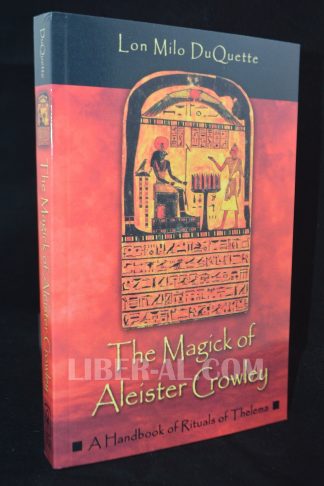 You're viewing: The Magick of Aleister Crowley: A Handbook of Rituals of Thelema $16.59
Add to cart