To Perfect This Feast: A Performance Commentary on the Gnostic Mass

Aleister Crowley wrote the Gnostic Mass in 1913. He described it as the central ritual, public and private, of Ordo Templi Orientis (O.T.O.). It is a mythic hymn to the wedding of scientific truth and religious aspiration; the celebrant is encouraged to leave superstition and dogma at the door and join in an ecstatic tribute to the glorious nature of reality. The Gnostic Mass offers a truly modern spirituality and it is being performed on a regular basis throughout the civilised world.

The authors – both longtime O.T.O. members and consecrated bishops of the Ecclesia Gnostica Catholicae (EGC) – share between them over half a century of practising the Mass. Their passionate devotion to the rite was rewarded in 2006 with an important, long-sought insight into the complex geometry of the ritual. In 2009, they published their research in the first edition of this book. Based on a continuing series of understandings, an even more accurate second edition was created in 2010. This third and final edition solves remaining subtleties in the choreography of the five officers and the overall conclusion of the rite.

The detailed instructions presented here not only provide the missing performance keys to the geometrical puzzle of the Mass, but offer a window into the wider workings of magical ritual.

James Wasserman is a lifelong student of esotericism. His writings include The Mystery Traditions: Secret Symbols and Sacred Art, and Aleister Crowley and the Practice of the Magical Diary. His Chronicle Books edition of The Egyptian Book of the Dead: The Book of Going Forth by Day features the fullcolor Papyrus of Ani with integrated English translation. The Templars and the Assassins: The Militia of Heaven has thus far been published in six languages. His controversial The Slaves Shall Serve: Meditations on Liberty defines political freedom as a spiritual value. His newest book is An Illustrated History of the Knights Templar. He is currently editing a series on Western occultism known as The Weiser Concise Guides. You can find him online at www.studio31.com. He lives in New York City with his wife Nancy.

Nancy Wasserman is an experienced and dedicated occultist who has been practicing the magical system of Aleister Crowley for many years. She has contributed several articles to the O.T.O. publications as well as The Pathworking of Aleister Crowley. She lives in New York City with her husband and editor, James Wasserman.

Aleister Crowley (1875-1947) was the most widely read author in 20th-century occultism. He single-handedly redefined magic as a field of inquiry and endeavor through his books and the order that he led–the A.A. and the O.T.O. He is the author several books including The Book of the Law, 777 & Other Qabalistic Writings, and The Book of Thoth. 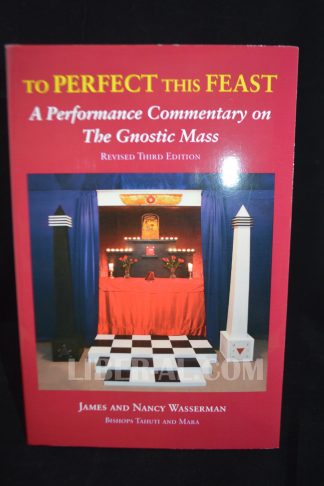 You're viewing: To Perfect This Feast: A Performance Commentary on the Gnostic Mass $20.03
Add to cart