Weiser Books, USA, 2017. Paperback. 352 pages. New Edition, revised with a new introduction that provides information on the unicursal hexagram cards included with the deck but never explained. This unique guide provides everything you need to know to get the most out of using the Thoth deck in clear language. Brand New.

Aleister Crowley’s Thoth Tarot was his final opus, the culmination of a lifetime of occult study and practice. With artist Lady Frieda Harris, he condensed the core of his teaching into the 78 cards of the tarot. Although Crowley’s own Book of Thoth provides insight into the cards, it is a complicated, dated book. Now, in clear language, Lon Milo DuQuette v

Originally published in 2003,Understanding Aleister Crowley’s Thoth Tarot has proved to be the essential guide to accessing the unique symbolism and meaning of Aleister Crowley’s remarkable tarot deck along with the deeply textured artwork of Lady Frieda Harris. Crowley authority, Lon Milo DuQuette, starts by providing an insightful historical background before delving into descriptions of each card in depth, from a tarot perspective and from an expanded, magickal point of view. He first describes the tarot meaning of each card in detail and then explains all the other attributions Crowley intended.

Lon Milo DuQuette has been involved with occult studies since the late 60s and has become an acknowledged and widely-recognized authority within the world of modern occultism. He is the U.S. Deputy Grand Master of the O.T.O. Singer-songwriter and recording artist, Lon Milo DuQuette is also the author of 16 critically acclaimed books (translated in 12 languages) on Magick and the Occult. Critics have called him one of the most respected and entertaining writers and lecturers in the field of the Western Mystery Traditions. Since 1975 DuQuette been a national and international governing officer of Ordo Templi Orientis, one of the most influential magical societies of the 20th Century. He is currently the Order’s United States Deputy Grand Master. He is an internationally recognized authority on tarot and western ceremonial magick. Although he takes these subjects very seriously, he tries not to take himself too seriously. This rare combination of scholarship and humor has earned him in the last 20 years a unique and respected position in American spiritual and esoteric literature. DuQuette appears occasionally on television and radio as a guest expert on subjects involving the occult. He is a contributor to the Magical Egypt DVD series’ and a host on the new series, The Great Work. He is a faculty member of the Omega Institute in Reinbeck New York, and Robert Anton Wilson’s Maybe Logic Academy. He lives in Costa Mesa, California with his wife of 45 years, Constance. 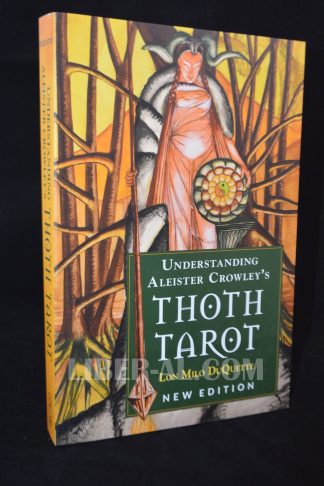