VIA TAROT: The Path of Life (SIGNED)

A beautiful deck full of occult and thelemic symbolism and considered by many one of the best tarot decks ever produced! Brand new, still with seals intact, this beautiful boxed deck and booklet has never been used and was received in person from the hand of Susan Jameson, and is signed by her on the reverse of the box. A rare and highly collectable treasure!

Do what thou wilt shall be the whle of the Law

Susan Jameson is a respected artist who has held many one-woman exhibitions around the world and whose work is represented in numerous public and private collections. She is a senior initiate of Ordo Templi Orientis and has spent much of her life studying and practicing the principles of Thelema. Taking three years to complete, the VIA Tarot is part channelled and part researched using previously unpublished material by Aleister Crowley made available by Hymenaeus Beta, Frater Superior of O.T.O. What makes this deck unusual is the high quality of the art-work combined with the initiated insight of the artist. It combines qabalistic, alchemical and astrological symbolism in exquisitely drawn imagery, each card a unique work of art.

The images that appear in this deck are very different to the work for which Susan Jameson has become known over the past forty years. Different not only in the medium she has chosen, coloured pencil rather than her more familiar mezzotint, watercolour or oils, but in the very manner in which the work was first begun. The twenty-two trumps or major arcana of this pack derive from a channelling experience resulting from a series of scryings or spirit-visions using a magical technology developed by Dr. John Dee and elaborated by the Hermetic Order of the Golden Dawn and others.

This does not mean that the VIA deck is an Enochian tarot, for it is not. It does contain a great deal of angelic imagery, and in one instance actually depicts the Enochian entities who assisted in its initial reception, but it does not set out to describe the Enochian cosmos in any but the most tangential manner.

The remaining sixty-six cards are certainly inspired by the reception of the major arcana and, as was the case with the trumps, each drawing was proceeded by a series of complex ritual workings, but they allow a far more personal interpretation of traditional tarot imagery than do the directly transmitted cards. In the minor arcanum Jameson has used fragments of dream and scrying imagery combined with her own understanding of the nature of each Atu and notes, some unpublished, made by Aleister Crowley. They present themselves as every bit as powerful as the trumps themselves and acknowledge their debt to Crowley by the inclusion of small lozenge-shaped inserts depicting his suggestions for each card.

The VIA pack is fundamentally Thelemic in its inspiration and execution. Although the deck is accessible and meaningful to all, regardless of belief-system or, indeed, the lack thereof, behind every card stands the Book of the Law and it is the principles of that book which inform and illuminate every aspect of the design.

Love is the law, love under will

Susan Jameson is an accomplished artist and engraver with an international reputation. She has had over 20 solo exhibitions around the world and her work is in many private, public, and royal collections. Even though Susan usually paints in mezzotint, watercolor, or oils – this deck is done in colored pencil. She is also senior initiate and officer of a major magical order. She lives on the southern coast of England. John Booner (Booklet Writer) is an artist’s agent, fine art printer, and gallery director. His book, Qabalah, A Primer was published in 1995 and again in 2002 by Red Wheel/Weiser Books. Bonner resides in England. 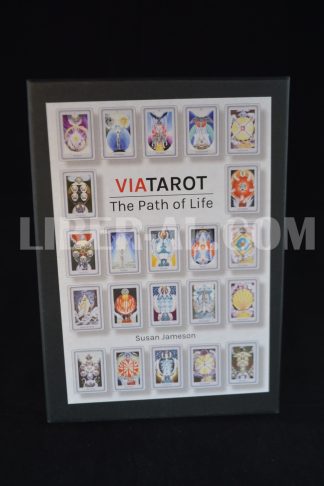 You're viewing: VIA TAROT: The Path of Life (SIGNED) $410.34
Add to cart
We use cookies to ensure that we give you the best experience on our website. If you continue to use this site we will assume that you are happy with it.Ok