Victoria’s Madmen tells the stories of a host of figures who came to exemplify a contradictory history of the Victorian age: not one of Dickensian London and smoking factories, but one of little known revolutionaries and radicals.

Clive Bloom mixes extraordinary marginal voices with famous – and infamous – figures, from messiahs like Richard Brothers and Octavia ‘Daughter of God’; writers such as Oscar Wilde, Arthur Conan Doyle, and Edward Bulwer-Lytton; revolutionaries and radicals like Karl Marx, Beatrice Webb, George Bernard Shaw and Oswald Mosley; madmen like Richard Dadd and Jack the Ripper; orientalists and guerrilla fighters such as T. E. Lawrence; worshippers of Pan such as Arthur Machen, Kenneth Grahame and J.M. Barrie, as well as the Latvian anarchists who killed three policemen in the East End of London.

This is the story of those who were outcasts by temperament and choice; the non-conformists of the age. Clive Bloom’s readable account of the dark underbelly of Victoria’s Britain perfectly captures the unrest bubbling under the surface of strait-laced society. 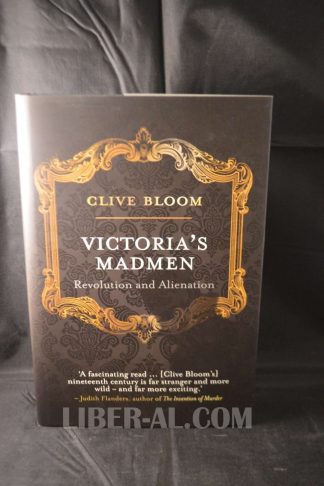 You're viewing: VICTORIA’S MADMEN: REVOLUTION AND ALIENATION $21.73
Add to cart
We use cookies to ensure that we give you the best experience on our website. If you continue to use this site we will assume that you are happy with it.Ok