The Blue Equinox: The Equinox, Volume III No. 1 (Weiser Edition)

Weiser Books, United States, 2007. Paperback. 132 pages. First published in 1919, it details the principles and aims of the secret society O.T.O. and its ally the A∴A∴, both of which were under Crowley’s control at the time. It includes such topics as The Law of Liberty, The Gnostic Mass, and Crowley’s Hymn to Pan. Brand New.

First published in Detroit in 1919, the legendary Blue Equinox was Crowley’s first attempt to publicize the principles and aims of the magical secret society Ordo Templi Orientis (O.T.O.) and its allied order the A.A. In it, Crowley laid out the esoteric, social, ethical, and philosophical ideas that he believed provided the framework for a new ethics and the liberated morality of the future. Upon publication, the book was threatened with suppression by the authorities of the day. Many of the papers in the Blue Equinox anticipated social liberties we tend to take for granted today.

The Blue Equinox opens with Crowley’s poem “Hymn to Pan”, a devotional work devoted to the ancient Greek deity Pan. This is followed by an editorial, in which Crowley discusses Thelema, the A∴A∴ and the O.T.O., and the important role which he believed that they had to play in the Aeon of Horus. 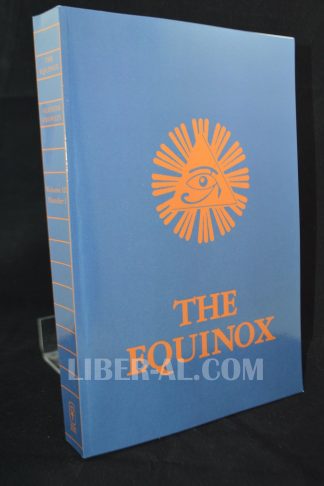