The Dark Lord: H.P. Lovecraft, Kenneth Grant and the Typhonian Tradition in Magic

One of the most famous yet least understood manifestations of Thelemic thought has been the works of Kenneth Grant, the British occultist and one-time intimate of Aleister Crowley, who discovered a hidden world within the primary source materials of Crowley’s Aeon of Horus. Using complementary texts from such disparate authors as H.P. Lovecraft, Jack Parsons, Austin Osman Spare and Charles Stansfeld Jones ( Frater Achad ), Grant formulated a system of magic that expanded upon that delineated in the rituals of the OTO: a system that included elements of Tantra, of Voudon and in particular that of the Schlangekraft recension of the Necronomicon, all woven together in a dark tapestry of power and illumination.
THE DARK LORD follows the themes in the writings of Kenneth Grant , H.P. Lovecraft and the Necronomicon, uncovering further meanings of the concepts of the famous writers of the Left Hand Path. It is for Thelemites, as well as lovers of the Lovecraft Mythos in all its forms and for those who find the rituals of classical ceremonial magic inadequate for the New Aeon.

Travelling through the worlds of religion, literature and the occult, Peter Levenda takes his readers on a deeply fascinating exploration on magic, evil and The Dark Lord as he investigates of one of the most neglected theses in the history of modern occultism: the nature of the Typhonian Current and its relationship to Aleister Crowley’s Thelema and H.P. Lovecraft’s Necronomicon.

This book weaves together a few of the most essential themes of Grant’s work, providing clarification and insight into Grant’s fascinating and at times overwhelming ocean of numerology and arcane references.

Peter Levenda is an author of esoterica and historical investigation. He has appeared numerous times as an expert on Nazi occult beliefs on the History Channel, the Discovery Channel, the National Geographic Channel and TNT, in shows ranging from Brad Meltzer’s Decoded to The Nostradamus Effect. 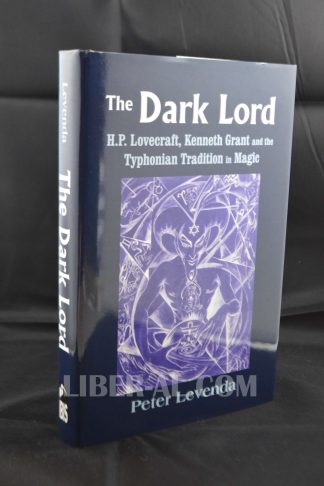 You're viewing: The Dark Lord: H.P. Lovecraft, Kenneth Grant and the Typhonian Tradition in Magic $33.71
Add to cart