This book is the introduction, the foundation upon which all further magical work will be based. Its simplicity, clarity and depth is without equal occult literature. The First part of Book Four deals with Yoga in a very sound and methodical manner, stripping it of the mysterious and glitter. Soberly, Crowley describes each step as a technique of mental and/or physical discipline, ultimately resulting in complete control of the will and with this, control of the physical and mental body. Crowley speaks with authority as he is one of the few writers on the subject of Yoga and Magick who has attained Dhyana and Conversation with his Holy Guardian Angel through discipline and ritual practice. The second part of Book Four is an encyclopedia of magical symbolism, the working tools in practical magick. All of the paraphernalia employed in ritual magick are carefully explained in both psychological and mystical terms. The Wand is the will of man, his wisdom, his word, the Cup is man;s understanding, the vehicle of grace; the Sword is reason, the analytical faculty of man; and the Pantacle is man’s body, the temple of the Holy Ghost. All phenomena are sacraments. Every fact must enter into the Pantacle. It is the great storehouse from which the Magician draws. The laws and truths of the accult world which are presented here give the student a sound working knowledge and set him firmly on the path. Book Four is a concise, direct and honest presentation.

Aleister Crowley (1875-1947), also known as The Great Beast and the Wickedest Man in the World, was one of the most profound students of Magick, Qabalah and Yoga. His vast influence reaches through all modern occultism. He is widely recognized as the first Western investigator to give initiation a truly scientific method. In reconciling occultism to physical science, mathematics and philosophy, Crowley achieved a lasting synthesis that remains unsurpassed for depth of insight and comprehensiveness. 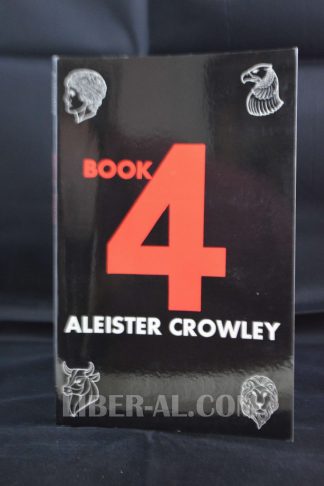 You're viewing: Book 4 $17.83
Add to cart
We use cookies to ensure that we give you the best experience on our website. If you continue to use this site we will assume that you are happy with it.Ok